Showery rain during the second week of February and cooler overnight temperatures have cooled the surface of local lakes slightly but the stream mouth fishing remains excellent. High catch rates are still being had at Hamurana, Awahou, Waiteti and the Ngongotaha and the fish are mostly hard fishing and in excellent condition. Rainbows typically around 45cm are being frequently landed with a few larger ‘Rotoiti imports’ amongst them. Browns are harder to find, of a better size but worth the challenge when you catch them.

Rainbows are responding to smelt patterns stripped fast and jerky near the surface whereas browns are on the bottom and will be better targeted with bully patterns such as Wolly Buggers. Some anglers are preferring to use a team of small darker coloured nymphs twitched enticingly just under the surface – it’s hard to go past the fish-attracting powers of a small pheasant tail nymph.

In addition to the stream mouths listed above, there are a couple of smaller, cold, spring-fed streams entering Lake Rotorua. The Waiowhiro Stream enters the lake near Kawaha Point and can be accessed via the reserve from Gemini Place and the Waingaehe Stream enters the lake from Holdens Bay in the east and can be accessed from the Holdens Bay reserve. Both are worth a look especially in the evening at the change of light. 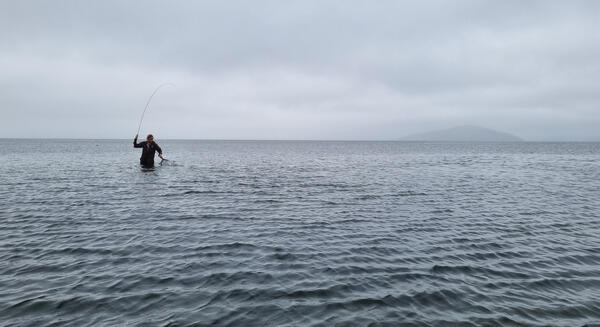 Be courteous to other anglers when you fish in populated spots like the Rotorua stream mouths. Enter and exit the water with consideration of others who are fishing by trying not to cross in front of them. When in the picket fence, fish in the same direction as others – usually down the flow or downwind. Avoid casting across other people’s lines if you can and give people space when they are playing fish.

Action on Rotoiti, Tarawera and Okataina hasn’t slowed either with good catches coming from all of the deeper methods. A few fish are being taken shallow trolling early in the morning but with surface temperatures still high it will pay to focus on downriggers and jigging. Lake Rotoma has also fished well recently also and the fish there are looking to be in great shape.

Cicida action continuies on the streams and rivers of the region and although this is tapering off the fish are well focused on terrestrial activity. Humpies, Royal Wulf and any stimulator dry patterns used as a dry/nymph dropper rig are taking fish.

The rahui on the Whirinaki River has been recently lifted so anglers are pleased to be fishing there again. Sport Fly NZ held a round of it’s competition on an open stretch of the Whirinaki recently. Fourteen anglers landed and released 357 fish for the competition, the largest being a 63cm rainbow with lots of fish around the 40 and 50cm range. Te Urewera is now also open for visitors but hunting is not currently permitted.

Catch and release during summer heat 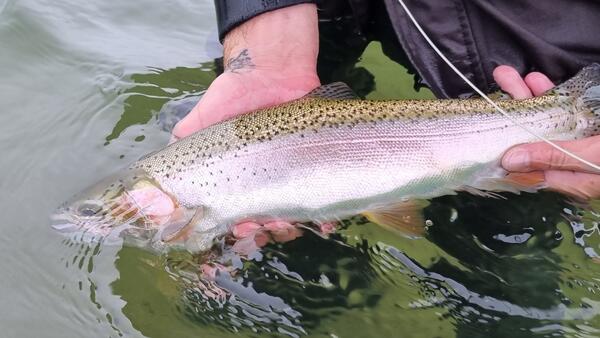 When water temperatures are high, good fish handling technique becomes critical. Try to keep the fish in the water 100% of the time by using a good quality, fine mesh landing net. Unhook fish without taking them out of the water, and if you must have the classic ‘grab ‘n grin’ shot for your social media page, have the cameraman ready so that the fish is only out of the water for a couple of seconds. Have your hands well wetted and cool before you handle the fish. In extreme heat consider not fishing unless you plan to kill your catch. Cold headwater fisheries and spring creeks can still be fished in summer but when the water gets above 20 C fish survival decreases.

Trout fishing rules up for review

Do you have any thoughts around improving the trout fishing rules? The ‘angling rules’ are reviewed every second season by the Eastern Region Fish and Game Council.

Fish & Game Officer Matt Osborne says the ‘rules & regs’ for the 2022-23 fishing season are now being examined and submissions are welcome, “for all anglers and across all Eastern Region waters.”

“Our sports fishing regulations are about setting rules to ensure the sustainability of fisheries, but without unnecessarily restricting angler opportunities,” Mr Osborne says.

The proposals for the 2022-23 season, will go before a meeting of the Eastern Fish & Game council in June 2022. If adopted, they would come into effect from 1 October next year.

Datawatch tagged trout can now be entered online. Entries go into the draw to win one of 20 free whole-season fishing licences: https://www.surveymonkey.com/r/QCH5ZR6

Fill in your fishing diaries here to help us manage the Eastern Fish & Game region. Participants go in the draw to win a $100 voucher from Kilwell: https://www.surveymonkey.com/r/QRSD7D3