As mentioned last month, pre-spawning trout are in prime condition at this time of year.

Lake Tarawera fish have really come on over the last few weeks and both the catch rate and condition factor has been excellent since Easter weekend.

Anglers have also commented on the fine flesh quality of the fish currently, not just the Rotorua lakes but Waikaremoana too.

Rotoiti on the other hand continues to produce bigger fish but the fishing has been hard for whatever reason – sometimes there can be so much food available your offerings hardly get a look-in!

We did receive a nice pic of an 11lb Rotoiti fish taken jigging a couple of weeks back – we'll feature in a cominng newsletter.

The deeper lakes have all but lost their thermoclines with consistent and comfortable trout temperatures now from surface to 25 metres-plus.

Fish can be caught successfully on the surface with smelting gear and at depth either jigging or using a downrigger.

Also try shallow trolling smelt flies or spinning or fly fishing from a drifting boat at this time of year.

Spawning fish too are on the move motivated by recent rain and anglers are catching fish at stream mouths and release points throughout the region.

You can find our hatchery liberation schedule and release locations here.

The best times are always morning and evening and wet weather is much better than a calm sunny day!

Expect the fish and fishing to continue to be good through May, keeping an eye on the forecast for favorable conditions – and remember ‘favorable’ conditions for catching trout aren’t always nice weather.

Fishing tip for May

Orange and red are the colours of the month!

Debates about fly and lure selection have raged as long as fishing itself – and they’ll  likely continue for ever more!

One thing’s for sure, and that’s that spawning fish are responsive to colour, especially orange and red tones. 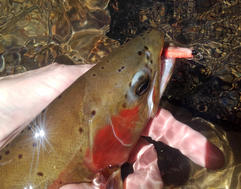 It’s unclear why this is but theory has it that it’s related to the colour of ova (roe) which is usually bright orange and a favorite food of spawning trout.

Another thought is that red triggers an aggressive reaction in male trout which themselves redden up during spawning to attract a mate and fight off other suitors.

Either way, adding a little orange or red to your flies or using a traditional pattern like a red setter pays dividends at this time of year!

Angling rules to change next season

The Eastern Fish and Game Council at their April meeting made several changes to the angling rules that will come into force next season starting 1 October 2018.

There are still two further possible changes to be discussed at the June Council meeting.

Remove fly fishing only designation from some of the Rotorua lakes shoreline areas. Council is to rule on which areas allow spin angling from 1 October.