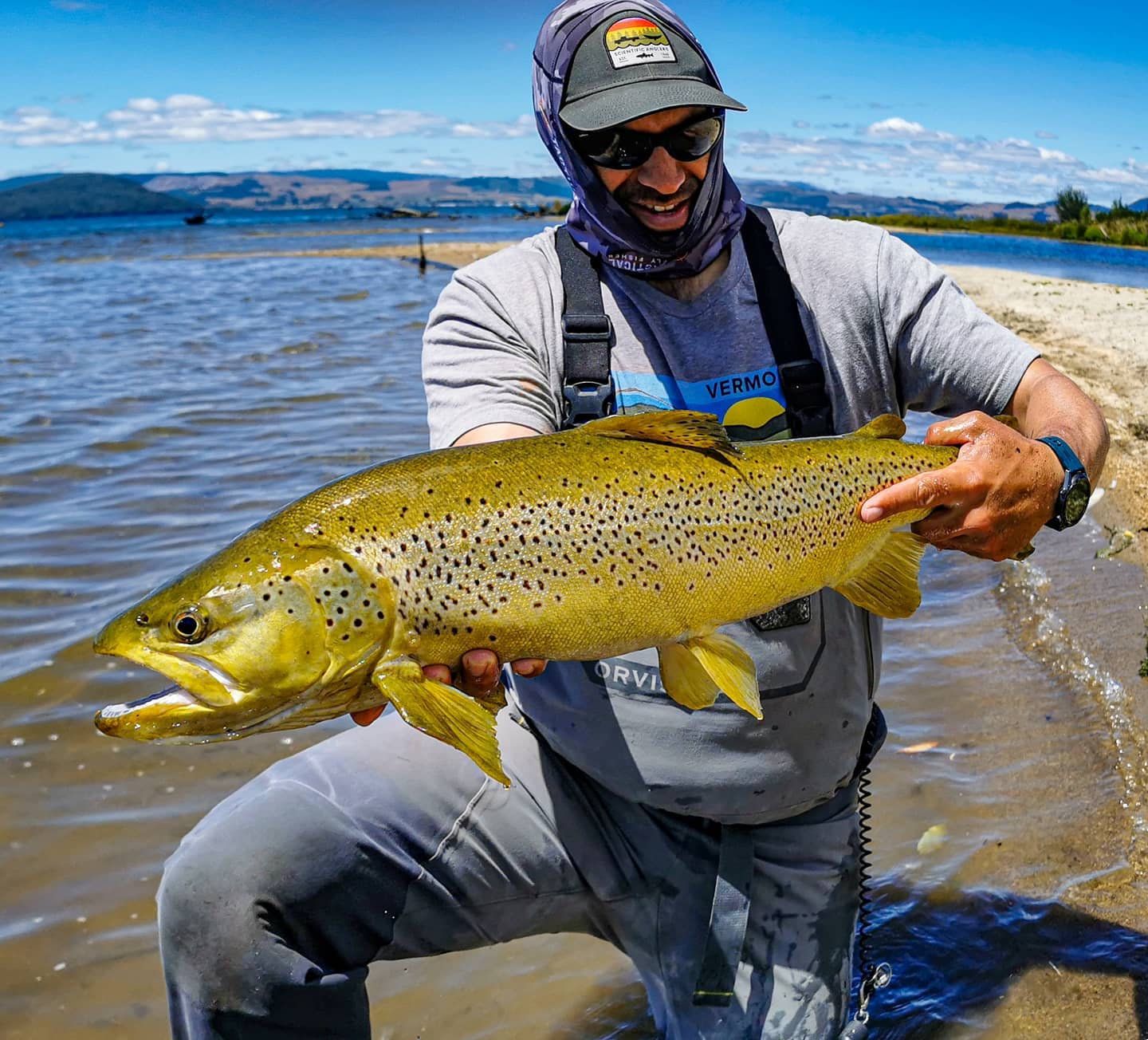 As I write this welcome rain is falling in the region, refreshing and rejuvenating rivers and streams and reducing the surface temperatures on our lakes a little.

Summer isn’t over by any means, but the cooling rain after such a long dry spell will work wonders to keep rivers clear of filamentous algae and the temperatures at a tolerable level for trout.

Lake Rotorua’s temperature peaked at 24.5 degrees on January 15th this year but has dropped since and sits mostly between 21 and 23 degrees C – still excessively warm for sensitive trout.

As I said, there’s still plenty of summer ahead of us, so expect the good fishing to continue for some time.

Stream mouth fishing has been good but inconsistent and hard to predict with rain and wind followed by hot calm days all adding to the confusion.

Anglers have reported some impressive catches and equally impressive size brown trout with the fishing being red hot one day and almost dead the next!

The image shown is local guide Dion James of Rotorua Sight-fish Adventures with one of many spectacular summer browns he’s caught and an example of what you can find locally if you work hard and put in the hours.

We released over a dozen oversized rainbows into Lake Rotorua on the 17th of February and were delighted to hear several were caught that very afternoon.

Several of the fish released were over 10lb so we hope they make someone's day!

It’s a condition factor competition – so fat is good!

Several of the winning fish scored over 60 points on the CF scale.

If interested you can locate the condition factor formula here.

Shallow trolling has resulted in some fantastic condition fish and fly fishing from the shoreline with dry flies and nymphs for the first few hours of the morning has been productive also.

Waikaremoana’s thermocline is sitting deep at around 25m, so jigging is the only allowable method that can target that sort of depth – metal lines and downriggers are not permitted on Waikaremoana.

Fortunately, the water above the thermocline is still cool enough for trout so there’s no need to get overly deep.

The preferred line for trolling Waikaremoana is LED, (a non-metallic, fly-line-like)

Access track spraying is all the go in the Kaingaroa forest at this time of year when the blackberry and gorse are growing at a break-neck pace.

As a reminder, you can still access the Rangataiki River off Ngahuinga Road and off River Road, SH5 (Taupo-Napier highway) year-round (unless felling is occurring at that location).

Access info can be found here, and a brochure for the Rangataiki and Whirinaki rivers here.

Entries go into the draw to win one of 20 free whole season fishing licences.
https://www.surveymonkey.com/r/QCH5ZR6

Fill in your fishing diaries here to help us manage the Eastern Fish & Game region. Participants go in the draw to win a $100 voucher from Kilwell: