Lake Rotoiti has been one of the top performers so far this summer, serving up some “solid” catches.

Fish are still being caught and the Rotorua trout are in good condition, but anglers have been a little disappointed that the action hasn’t matched up to last year’s bumper fishing.

Interestingly, the thermocline on Tarawera and Rotoiti is actually deeper than last month so anglers that are able target 20 to 25 metres should find hungry trout!

Lake Rotoiti continues to produce solid catches of big, fat rainbows and experienced fishers are reporting it’s one of the best year’s for some time.

The dry and windy spell of weather prior to mid February’s rain has seen an abundance of cicada hatching, providing some super fishing around the district.

Trout are focusing on this easy food source and it’s not difficult to get them to the surface with a cicada pattern. 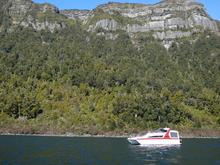 Lake Waikaremoana is fishing well. The anglers on one particular boat interviewed in February had landed eight fish for a half-day effort and said it was the best fishing they’d ever had at the lake.

The shoreline stalking, for which Waikaremoana is renown, has also been productive early in the morning and later in the evening, and the brown trout are cruising and on the look-out for cicada.