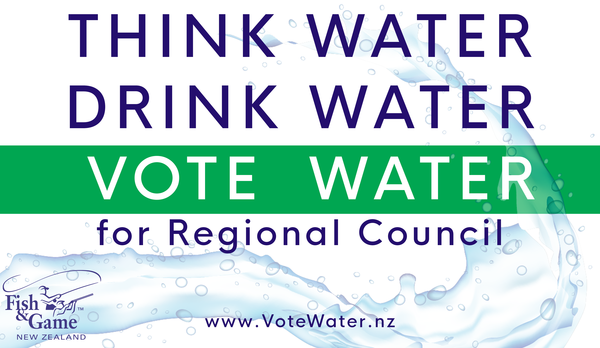 Then Vote Water at the 2019 Local Elections.

This is your chance to have a real impact on practical New Zealand politics by supporting regional council candidates that will make freshwater management a priority for regional councils.

By voting for regional council candidates that will prioritise freshwater, you will be sending a strong message that these types of environmental failings are not acceptable. Fish and Game New Zealand want to see freshwater as one of the major points of debate at this year's Local Election.

How do voters find information on candidates?

Candidates will generally promote themselves from the time their nominations are confirmed until the end of the election period.

Make sure you’re enrolled and ready to vote…

You can enrol at this link, or check your enrolment details:

If you have any problems with enrolling, checking or updating your enrolment details, you can call the Electoral Commission on 0800-367656.

How can electors vote if they’re not on the roll?

Electors have until mid-August of the election year to get on the roll before the rolls close for the local elections. After that date, if an eligible elector is not on the roll, or their roll details are wrong, they can cast a special vote.

Anyone who wants to cast a special vote must contact the electoral officer by the day before polling day at the latest.

Want a seat at the council table?

Who can stand for election? Candidate nominations open in July (19th) and as long as you're not serving a prison term of three or more years, there are four things you need to be to qualify.

You must be a New Zealand citizen, be enrolled to vote in parliamentary elections, 18 years old (or will be come election time) and have been nominated by two electors from the district you want to represent.

Then you have to put up a $200 deposit (but can get it back depending on the number of votes you get).

For more information on ‘voting and becoming a councillor’ click here

When will election results come out?

Votes are processed, but not counted, as they come in. The announcement of the preliminary results will depend on the flow of the returned voting documents to electoral officers.

Electoral officers have the discretion to announce progress results (i.e. votes counted to date), and some do so very soon after midday on polling day for FFP - First Past the Post.

Some city and district councils will use the STV, or Single-Transferable Vote system in which voters use numbers to rank candidates in order of preference.