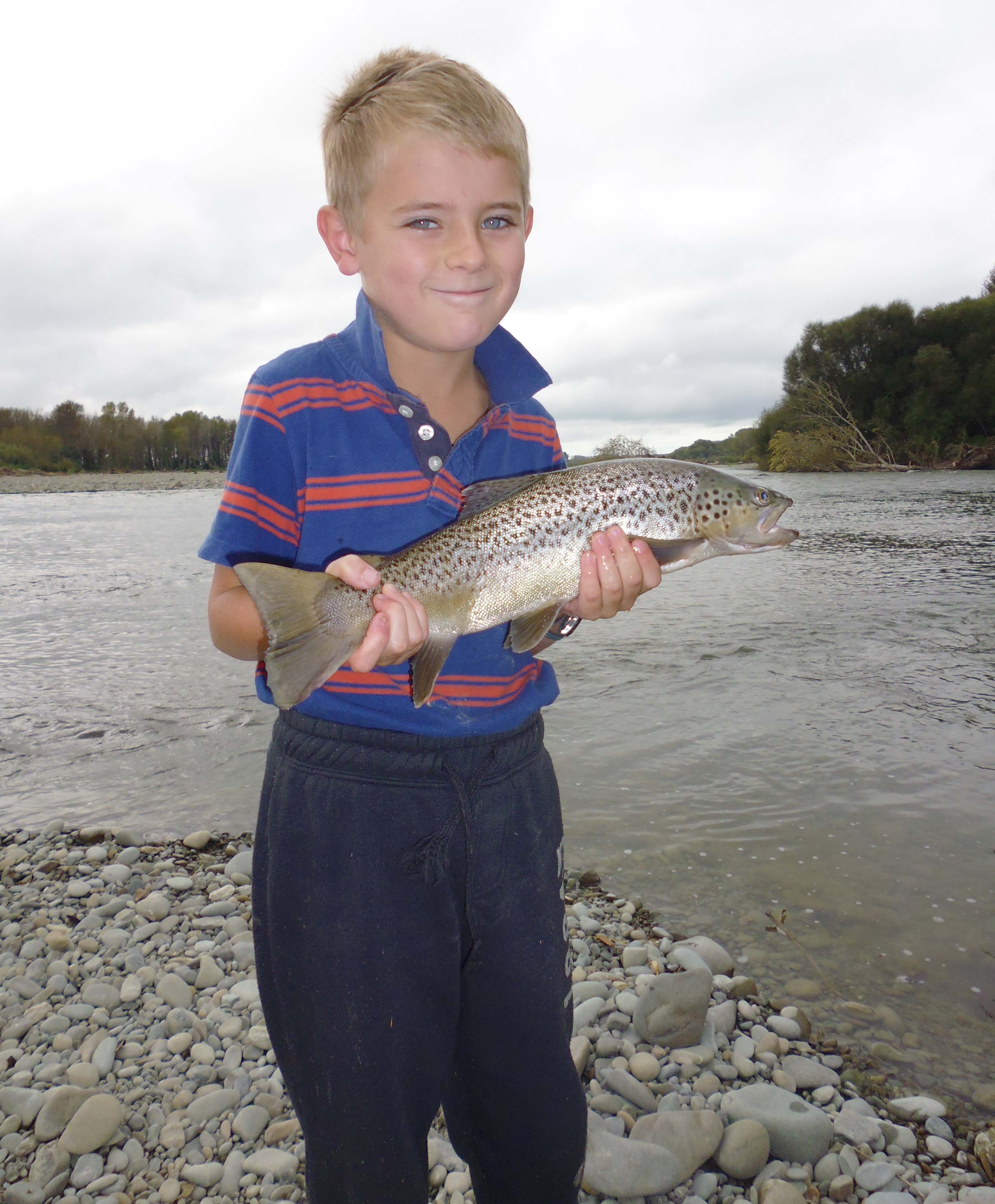 Its Easter so you are getting this report on a Thursday. Easter is traditionally a big weekend for fishing, especially when it falls in March or as it has this year, in part of March.

Saturday the 31st of March is the last day of the sea-run salmon season, so you only have a couple of days left to catch a king.

A considerate reminder too, plenty of other waterway enthusiast will be out and about to enjoy the places we do this weekend.

Above Right: Cameron Blogg with his first fish a brown trout from the Opihi River.

So please be tolerant with other legitimate users of our public places like jetboaters, yachties, water skiers, dog walkers and kayakers.

Jet skiers on the other hand… no, just joking please be tolerant of them too.

The weather is offering opportunity this weekend but there will be strong wind spells and the odd shower of rain.

At this point I’d guess Friday and Monday morning offer the pick of the weather windows.

There may be enough rain on the main divide to raise the Rangitata River, but the salmon season will probably be over by then, and to be fair the river is at 136 cumecs as I write on Thursday morning so it may not be good fishing clarity this weekend anyway.

The Opihi River is still a bit high and discoloured in its middle and lower reaches.

From what I can gather the colour comes from naturally high flows, additional water being added by the Opuha Dam, a turned over riverbed which happened over the last few major flood events and multiple emergency river works projects that are happening or have recently been completed to protect farmland and bridges that resulted from the last floods.

A real combination of factors. I expect if we get a prolonged dry spell the river will clear up again before the end of the season.

The Opihi tributaries are generally clear but the main river, for the last month or so has been coloured and sub-optimal for sight fishing.

In saying that the coloured water has been ideal for spin and bait methods and generally for salmon fishing.

Some are saying with high flows the river hasn’t been better for salmon fishing in a long-long time. Unfortunately, salmon catches are rare this season.

They wormed fished and started off at Lake Opuha. Hamish said the fish were there but were not interested in taking their worms.

He thought perhaps they were keyed into a food source like water boatman.

They then fished the Opihi River in “perfect” worming clarity and Cameron managed to catch his first and second fish ever!

Congratulations Cameron and good on ya Hamish for getting the kids out fishing!

Hamish is our Rangitata salmon spawning surveyor and he stepped out of the helicopter yesterday with some optimism about the 2018 salmon run.

His surveying consists of 5 aerial counts of key salmon spawning tributaries of the Rangitata: Deep Creek and Deep Stream.

The surveys span from late March to mid-June.

Yesterday’s count is the first count only,  after the mid-June count, we will have an accurate estimate of the Rangitata spawning population for 2018.

Yesterday, March 28, In Deep Stream Hamish counted 169 salmon, compare that to 35 at the equivalent time last year and a total spawning population for the stream at 82 fish for last season.

For Deep Creek he counted 92 salmon, compare that to 42 at the equivalent time last year and a total run for the creek estimated at 423 fish for last season.

So, the optimism stems from the fact the first count this year is already higher than the total spawning population in Deep Stream specifically.

If the numbers increase normally as they do through to May we will be looking at a far higher spawning population than last year.

If what we see now is all we get then it will be a poor run.

Early in the week Genesis ceased spilling from Lake Tekapo to the Tekapo River. 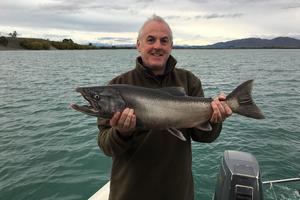 They don’t anticipate spilling to the river will occur for the rest of the fishing season.

Indeed, it may be years before they spill to the river again.

The reason they did so this year was because high inflows to the lake couldn’t be managed through the canal system while the power station was under maintenance.

The water levels can now be managed through the canal however the power station won’t be all fixed until mid-June, so canal flows won’t be at maximum until then.

The spilling has given the usually didymo ridden river a good ol dung out, so I suggest you jump on the opportunity to go and fish the Tekapo River this April.

I’m not sure how the river will be fishing but at least it should be a great trip out to an iconic fishery.

Finally, in this report, I wrote a fishing report last week, but it didn’t get sent out.

All our reports get posted to our website so if you ever get left waiting for it to hit your inbox you can check the website for it.

Here is the link to last weeks report for those readers who like to keep regular.