First-off in this report I’d like to highlight some recent work of Fish & Game staff.

Yesterday I was down at the Waitaki River Hāpua (lagoon) helping out ECan and CSI and North Canterbury Fish & Game staff to survey fish communities.

The survey is part of a project that aims to determine the state and health of the fish communities and compare the results to surveys that were undertaken in some of Canterbury’s lower braided river lagoons in the 1980s.

Yesterday we seine netted, a drag netting method, with a relatively fine mesh and I can share some observations of what we caught.

As I write the crew will be hauling in the fyke nets and Gee minnow traps that were set over night, these methods typically catch eels, inanga (whitebait) and bullies.

While seine netting, we caught thousands of common smelt, these are what anglers often refer to as silveries or cucumber fish.

Two Stokell’s smelt were caught and a few “suspects” were kept for laboratory analysis.

Stokell’s smelt are thought to be in generally low abundance and their whereabouts and abundance is a critical aspect of the hāpua surveys.

In the case of the mullet and flounder there were some big ones – be sure to stick to the fisheries regulations manged by MPI for these native fish species.

Ecologists from ECan are tasked with compiling all the catch data and making comparisons with historic surveys. 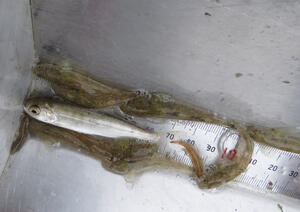 The weather forecast is promising this weekend; no rain to speak-of and mild temperatures!

However, after three weeks of back-to-back rain events the region is saturated and some rivers will be high but receding this weekend.

Nevertheless, there is always a spot or ten to fish in the CSI Region with many canals, lakes, small streams, and spring creeks remaining fishable after wet spells.

Be sure to check in at the ECan river flows website for up-to-date conditions.

High water levels can be a challenge when it comes to fly fishing for sighted trout; on the flip side it can provide optimal bait fishing conditions – especial for worm bait.

Fish & Game Officer Hamish Stevens is the most skilled worm angler I know.

Here is a summarised version of his worm fishing advice for rivers and streams.

Red dung worms are tops for bait and a great spots to find them is around woolsheds and cattle yards.

The lighter the sinker the better, just heavy enough to cast – put it on the main line.

Use a 50 cm trace and a size 8 bait keeper hook with one worm threaded along the length of the hook for concealment and go just over the eye of the hook.

Start at the head of pool and cast across the current letting the bait sink and drift to the bottom naturally – you may need to walk downstream with the flow.

Let it swing around in the current and once it stops swinging leave it in place for about 5 minutes before recasting or moving further down the pool.

A keen eye would recognise that squirmy were used by many of New Zealand most well-known fly anglers in episodes of the recent Pure Fly NZ YouTube series with fantastic results.

Finally, in this report I want to make a quick mention of the bait fishing regulations regarding the use of fish for bait.

Where bait fishing is permitted, “Natural fish” is a legal bait for sports fishing.

That means that fish must be whole and intact when used for sports fishing bait.

New regulations and requirements apply for sea run salmon in the CSI and North Canterbury Regions.

Why not gift a non-angling friend or family member a sports fishing licence and show them the ropes the holiday season!

All the type of licences on offer can be considered and purchased on the Fish & Game NZ Website here.