As I write this on Thursday Morning the forecasters are calling for significant rainfall regionwide from this afternoon and through Friday.

There is real potential for rivers and streams to be too high to fish this weekend and remain that way for some time.

If you’re heading out this weekend I strongly suggest you check out the Environment Canterbury river flows page by clicking here and selecting the “Southern Region” tab.

The weekends weather is looking much better and our lakes and canals should offer options for those planning to cast a line.

There may still be a few showers of rain to contend with.

Last weekend was the traditional High Country Opening and will probably be remembered by the strong westerly winds.

Overall the waterways were in good condition and plenty of anglers persevered in the wind and caught some nice fish.

If you were lucky some parts of the region had a calm Saturday morning.

We encountered just over 100 anglers and found full compliance.

Jayde Couper and I were at Lake Heron collecting DNA samples from lake resident salmon and bumped into a few anglers and got some photos.

Local Ranger, Dean Rattray, was ranging and fishing at Lake Heron and shared some local insight into how the 2018 opening compared with previous seasons.

He said salmon numbers were down on past years but those harvested were generally of a good size and condition.

There were comments from several anglers that the smaller salmon, not of a size they wanted to harvest, were in good numbers.

Dean said at times he’d never seen the lake so cut up from the strong winds.

A few trout were caught too.

Matthew Broatch caught a 5.5lb brown on a shad style spinner and Colette Brown caught a nice rainbow drifting a bubble and dragon fly nymph rig in the waves.

Tim Jackson took a quick break between social events to launch a spinner into the waves and pulled out a chunky 2lb brown trout.

He encountered anglers, or their vehicles, at nearly all traditional access points.

Success varied but most anglers had landed a trout by lunchtime.

Hamish met with two anglers who had caught tagged fish and we have since received reports of others from the opening.

Thanks for the reports!

In total, we have now had five tagged trout caught in the Waitaki and nine in the Haka.

Since being trapped in the lower Hakataramea over winter and early spring, the tagged fish have been caught as far as 3 km from the Haka mouth in the Waitaki and as far up as the Hunter Hills Conservation Area in the Haka.

If you do fish the Haka or anywhere in the lower Waitaki River Catchment this season please keep a keen eye out for these tagged trout.

Please contact our office with the tag number, capture location, and tell us if you kept or released it. 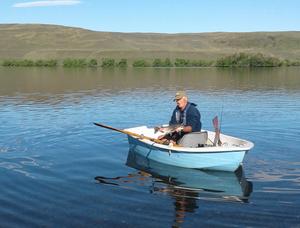 Alan Gillespie ranged and fished Lake Alexandrina on the weekend and said he only noted 8 boats out on opening morning and checked a dozen anglers on the bank.

He said the wind was an issue all weekend, but it came right on Monday.

He caught up with a few successful anglers and managed a brown and rainbow on a black gnat dry fly himself.

This week’s report has reached its max word count so next week I intend to report on the sockeye salmon catches that some keen Lake Benmore anglers have alerted us to.

Thanks to Mount Cook Alpine Salmon, the Fish & Game Twizel Kids Salmon Fishing Day held at Loch Cameron is fast approaching on the 17th of November.

The event is for kids aged 3-11 years old, registration is at the event just prior to the first cast at 9am.

Licence holders and members of the public are welcome to attend our next council meeting.

This is the first meeting of your newly elected council and a new chairperson will be elected.

The meeting starts at 8:00pm on Wednesday the 14th of November and is held at the Fish & Game boardroom, 32 Richard Pearse Drive, Temuka.