The alpine rivers have finally cleared a bit, but it could be potentially short lived.

It looks like there is another short weather event due around Saturday which will likely cause some strong winds and rain in the alpine headwaters.

If you plan to head out on the lakes or alpine rivers this weekend make sure you check the weather and flows, so you don’t get caught out.

The Rangitata is a passable colour for fishing at the time of writing however ECAN are still doing some pretty major river works, mostly to keep the bridges safe.

If you find unexpectedly dirty water in your favourite spot, either heading further upstream or fishing the evenings might give you a window of fishable water.

Right: Lower reaches of the Rangitata - Currently a good colour.

Over the holiday period, staff and volunteer rangers have been busy out checking licences, particularly on the canals and lake Benmore.

The team of volunteer rangers in CSI do an amazing job, giving up valuable days off over the holiday period to protect our fishery.

Rangers have caught a number of people in breach of the regulations over the holiday period but overall compliance rates have been good.

If you run in to a ranger, remember that they would probably quite like to be fishing as well.

The canals have been fishing pretty well overall, with good sized rainbows (4-8lbs) making up the majority of the catch.

It’s pretty hectic up there at the moment with cars and anglers lining the traditional haunts.

Most of the success I saw was from anglers who had decided to get away from the crowds, either by moving away from the most popular spots or fishing especially early or late.

The lakes are also fishing well, with most campers getting a couple of fish on their holiday.

Benmore is still cloudy from the rain, and we found anglers who were targeting areas with clear water were doing the best. 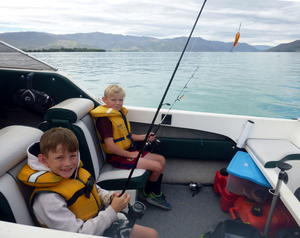 It’s always worth spending extra time on the areas where turbid and clear water meet as large trout use this area to ambush unsuspecting smaller fish or if you are lucky your spinner.

With what seems like half the country holidaying around the Twizel area, I’ve spent my spare time fishing the low country.

The low country rivers are quiet this time of year so its easy to find a few undisturbed stretches.

The Orari and Opihi catchments are in good nick for this time of year, without too much dark algae making spotting difficult.

I’ve seen a few posts on facebook suggesting that the trout are gorging themselves on willow grubs at the moment although I haven’t seen any evidence of it on my local stream.

It’s worth tying or buying a few willow grub imitations as the fishing can be great when the trout are honed in on them and not much fun if that’s all they will take and you don’t have any. 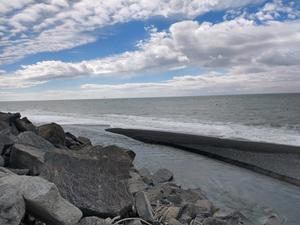 The Orari mouth on Tuesday, very cold and windy but good flow.

Looking forward, the weather following the weekend looks pretty good, so make the most of it and get out fishing while you can, we are around half way through the main fishing season and it can be over before you know it if you don’t make the time to enjoy it.