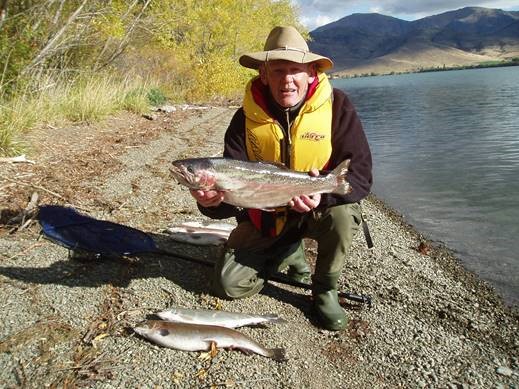 I've been in the hills hunting red deer over the past week so this report will be somewhat brief.

A quick glance at the river where I was hunting gave me a view of a nice trout rising for its lunch, and it reminded me of times when I fished more than hunted in April.

In my experience, trout fishing can be hit and miss during April and my advice is to play a numbers game if you can.

I reckon you should cast to as many fish as possible or if you can’t spot them,  cover as much water as you can.

Eventually one will bite, or you may strike a “bite time”.

Don’t spend too much time on that one fish that's being fussy, the next pool may hold a trout that bites on the first cast.

If they are not rising, I would try one good cast with a dry fly, then one with a small nymph and then strip a woolly bugger or similar past them.

Move on to the next water after that, 10 minutes per fish.

If you’re spin fishing, just keep moving through all the good water and cover some ground.

In April I've had some of my most memorable mayfly hatch fishing.

Even if you can’t match the hatch, the sheer site of the river “coming alive” with rising trout is a rewarding event.

If you are heading to the canals, I’d still recommend putting in some time on the Tekapo canal near the salmon farms if you're targeting salmon.

A few weeks back the fishing was going off and even though I wouldn’t expect that to be the case now, I still think you have a good shot at picking up a salmon if you put in the time.

I received an email from Peter Poulsen and Jonathan Reveley of the mid-Canterbury fishing club to say that their club trip to Lake Benmore was a great success last week.

They put most of the fish back but harvested a few nice rainbows as the photos show.

The long-range weather forecasts are predicting a cold and generally dry weekend after a wet front passes through the region on Wednesday night and Thursday morning.

There will be a south-easterly flow to the weather so expect cloudy conditions and a chance of some drizzle.

It will be cold in the high country, barely exceeding 10°C all weekend so take a puffer jacket and beanie and rug up warm.

The front earlier in the week was forecast with some generous rainfall region-wide.

Over the weekend some river flows may be receding after a top-up, but most should be fishable.

In general, water levels should be good for fishing this weekend and will benefit from some rainfall.

It never hurts to have a squiz at the ECan flow website before you go.

Our live salmon counts that we undertake to monitor the salmon spawning run of the Rangitata River Catchment are underway and we've completed two of five counts that span the spawning season.

Spawning times do vary between rivers and the Rangitata has one of the earliest in New Zealand.

On Monday my colleague Hamish buzzed these creeks at low level in a Guimbal Cabri G2 helicopter and counted a combined total of 223 live spawning salmon.

With three more counts to complete before we put a total estimate on the spawning run it’s early to say just how the numbers are stacking up.

It would be fair to say, that these numbers are on the low side, like those of the last two years, and reflect the quality of the fishing that was had on the river this season.

These runs are in line with what we experienced during the 2000/01 – 2002/03 seasons on the Rangitata so we are in familiar territory.

Just a quick reminder too, all sea-run salmon fishing is closed in the Central South Island Region in April.

Licenceholders and members of the public are welcome to attend our next bi-monthly CSI council meeting.

The meeting starts at 7pm on Thursday the 18th of April at the Fish & Game boardroom, 32 Richard Pearse Drive, Temuka.

Copies of council agendas and minutes are available on request under the terms of the Local Government Official Information and Meetings Act 1987.

The Waimate Gun Club is hosting a pre-season clay target shoot on Sunday the 14th of April, with 75 simulated duck hunting targets for $60, starting at 9am.

This is a great opportunity to get some shot-gun practice in before Opening Weekend of the upcoming 2019 game bird season.

The event is held in conjunction with Hunting and Fishing Timaru and North Otago and offers prizes, product testing, and expert advice.

The Waimate Gun Club is located off SH1, just North of the Waihao River Bridge.