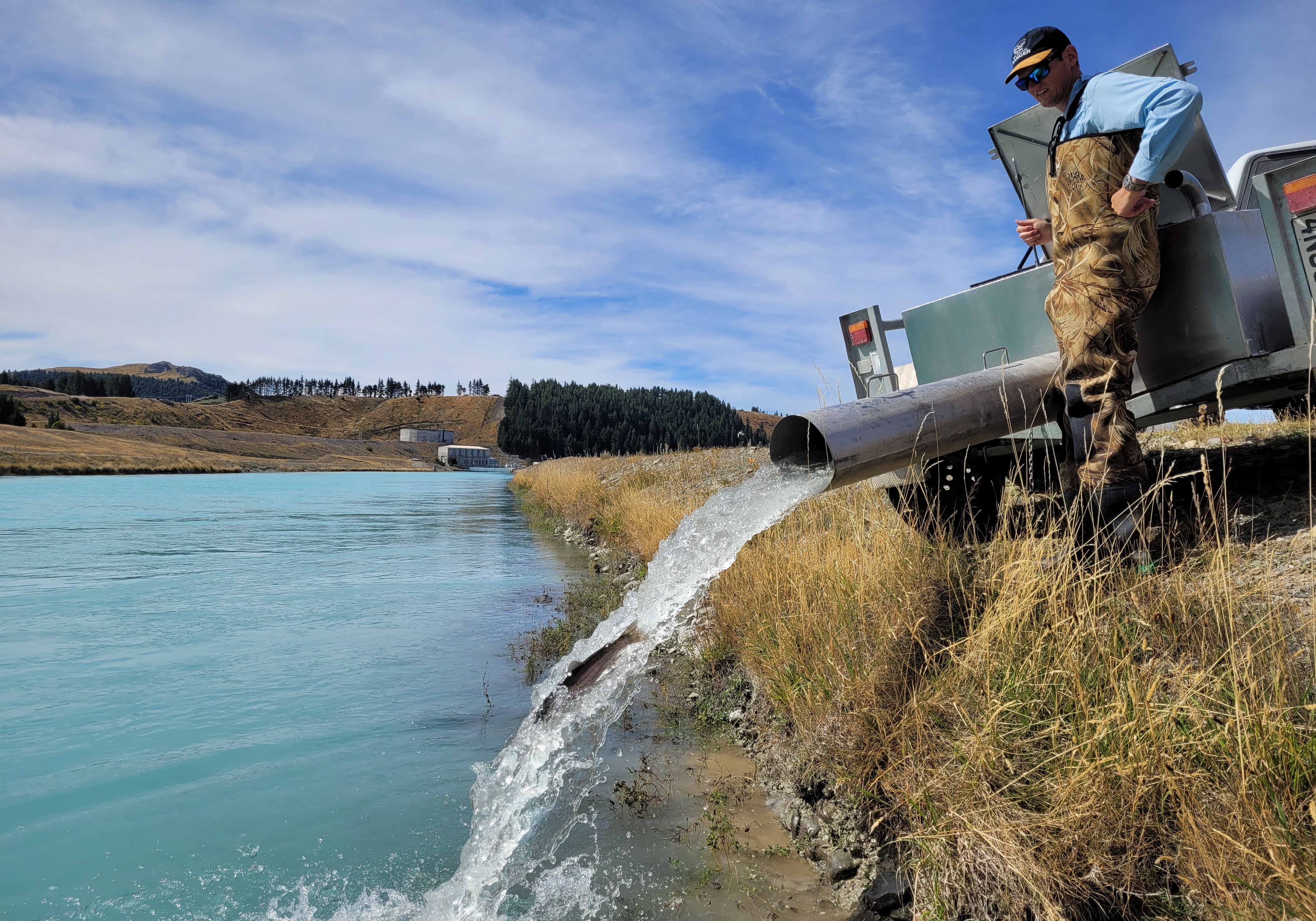 The Tekapo Canal fishery has been boosted with over 1,000 sports fish over the past week and some of them are tagged

These fish entered the Tekapo riverbed spillway during the recent 3-months of Spilling flows from Lake Tekapo to the lower Tekapo River by Genesis Energy.

Fish & Game worked with Genesis to access the fish that remained stranded in the spillway when spilling finished-up recently, relocating them to the permanent water of the Tekapo Canal and some to Lake George Scott.

If you catch one of the tagged fish, please report your catch to us – the key piece of information being the unique 4-digit tag number and the catch location. We would also like to know its size and whether it was kept or released. Phone 03 6158400 or email csi@fishandgame.org.nz.

The tagging project at the Tekapo Canal has been in place for about two years – check out this YouTube video to see how we recover and tag the fish before release into the Tekapo Canal.

Our most recent tagged fish catch report came from Kalib Te Ngahue who caught a tagged rainbow trout near the Tekapo salmon farm, weighing about 7 pounds and measuring 600mm.

We tagged that rainbow back on 22/12/2020 and measured it at 387mm, so grown around 213mm and about 6 pounds in 423 days. Exceptional growth as we have come to expect around the salmon farms.

Most of the fish we released this March were rainbow trout, about 1-pound, and we released them at the top Bridge near the Tekapo A Power station.

As you can see from Kalib’s report, if these fish make their way down to the salmon farms, they’ll be a very respectable size within a year or two.

Like my wife, I’m guessing other weekly fishing report readers are only here for the pictures so it’s great that we have reports and pics from Sandra O’Neill and Keith Aitcheson to share with you this week. 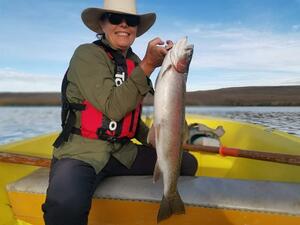 Sandra caught a lovely rainbow trout at Lake Alexandrina last weekend. The successful lure was a green wobbler. Although it has gone into the freezer for a later meal, judging by its condition its going to be a tasty meal.

Keith Aitchison was keen to share this photo of his 23lb 2oz salmon caught off Ohau Canal intake wall yesterday morning. It has taken Keith over 70 years to get one over 20 pounds.

Keith reports, “I am in my 76th year and managed to net this on my own in one of the most difficult parts of the Canals. I believe it is the most exciting part of it and cannot understand why many anglers get someone else to do it.”

“I would love to see more anglers giving it a go, it's not that difficult.” 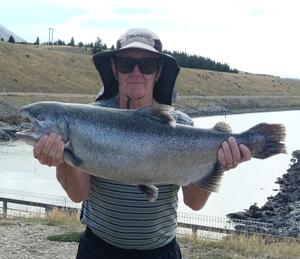 A short-lived wet front whips up the main divide on Friday – so it could pay to keep watch of flows on rivers like the Ahuriri and Rangitata.

Other than that, it’s looking like a pretty good weekend for fishing so don’t forget to slip-slop-slap and wrap, it’ll be sunny.

The easiest way to return your card is to photograph the catch information and email it to harvestcard@fishandgame.org.nz – we’ll reply to your email to let you know we have receive it.

The meeting will be held online via Zoom as a precautionary approach to the health and safety of Council and Staff regarding Covid-19.

The meeting will be recorded and available at a later date on CSI Council Downloads page of the www.fishandgame.org.nz.