It is with pleasure I can share some photos of successful sea-run salmon anglers and their salmon this week.

I can’t report that the fishing has been great but there is some optimism amongst some local anglers that this season could be better than what we have experienced over the last couple of years.

Above Right: Shelton Tipper and his Opihi Salmon from surf 08-01-2019 credit Paul McLaughlan.

He witnessed Shelton Tipper catch a salmon around 6.5 kilograms from the surf.

He kindly snapped a photo of Shelton so we could share it with you.

Paul said the kahawai fishing was excellent and that he reckons he spotted another salmon too.

I fished the Opihi mouth last Saturday and had a blast on the kahawai too but there was no sign of any salmon catches that day.

I got in touch with stalwart Opihi River angler Richard Davidson of Davo’s Fishing shop in Washdyke to see how the season was going for salmon.

Richard said he hadn’t caught a salmon yet but is confident that there has now been six or seven caught and a couple lost there for the season.

Considering the catches so far and the good river conditions Richard is quite optimistic that the season is shaping up to be better than the last few for salmon fishing for the Opihi.

I got in touch with Bill Whipp for the Rangitata mouth salmon report.

Bill has 10 salmon recorded on his tally board for the season. 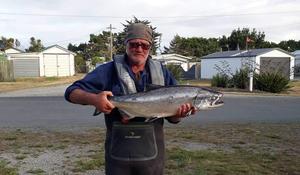 That includes one caught on Monday by Mckinnons Hatchery member Robert Clarke and two on Tuesday including that caught by Jimmy Whipp which is displayed in the photo presented here.

Bill said the fish have been in good condition this year, usually six to seven kilograms.

Bill couldn’t advise me on how many have been caught up-river or on the north side of the mouth but its fair to say that the catch tally so far has been disappointing.

Bill reckons about 25-30 anglers have fished the weekend mornings while yesterday there were only 12.

The weather forecast is looking good for tomorrow and Saturday so get stuck in.

On Sunday another Westerly front is going to blast through the main divide and bring strong winds and a showery southerly blast up the plains.

It doesn’t look to have too much rain with it but will make fishing difficult for the day in exposed places.

I think there is still some opportunity for some good fishing on Sunday and some area where the wind won’t be too bad.

We have had some rain over the week especially around the main divide and a decent spell around Mount Hutt and coastal North Otago.

It would be worth checking the river flows for the Rangitata and Ahuriri before you go, otherwise most rivers should be dropping in flow and fishable.

The exception as always is the Waitaki which should always be checked before fishing.

Being controlled by the Waitaki Dam for hydroelectricity, the flow range can vary by 300 cumecs from day to day and is only reliable for fishing up around Kurow.

Just a reminder too, keep an eye out for tagged trout in the Waitaki and Hakataramea Rivers.

It is also possible they might venture up the Maerewhenua too.

If you do catch one, we would like to know: tag number, location, kept or released. Please ph. 03 6158400 or email csi@fishandgame.org.nz.

I am also keen to find the values and experiences of anglers who fish Mary Burn.

I see that this small stream is at risk of being over grown and smothered by alder trees and to a lesser extent willows in the next 50 years if no further control is undertaken. 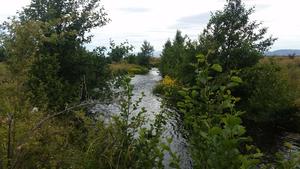 Please let me know which section of the stream you fish and which is the most valued and any information on how the current riparian vegetation affects your fishing access and enjoyment.

If you wish, all information provided will remain confidential as far as practical and your name will be anonymous.

Finally, in this report, Environment Canterbury has developed an app for easy reporting of environmental incidences (pollution).

Importantly, they still want any discharge of contaminants to waterways to be phoned in to the 0800 765 588 (24 hour) hotline.

If you’re not in to using apps, you should continue use the hotline number.

Check out the ECan website here to find out more and download the Send Snap Solve App.