This week’s report was written well ahead of time, so I’ll leave this coming weekend’s weather and water level forecasting to you.

As always, The ECan river flow website is the best source of river and water level info for planning your trip.

For online weather forecasting, the current trend is to use Metvuw for an overview of the weather and YR.no for high definition location specific and time sensitive info.

I was down the Waitaki River ranging and bumped into 21 nice folks out enjoying their day.

The river was receding in flow from 385 to 300 cumecs and clarity improved through the day in the lower river.

Catches were modest during the morning, but I would guess they improved as the day wore on.

Stephen Newberry and his crew were the first to launch their jetboat at Kurow for their annual Opening Weekend boys trip to the Waitaki.

They said the river around Kurow was quiet for boats, only about seven trailers at the ramp at lunchtime and catches were ok – not exceptional.

The crew’s biggest fish was a 4-pound brown and they said the smaller rainbows were the best “eaters”.

Stephen had a story of the eight that got away, from just one “beautiful big pool”. What are the chances of that?

He said a couple of his sharp-toothed foes left his soft baits tail-less.

Bortons Pond was busy early on but as the river cleared anglers spread out through the valley and on to the river.

It was great to see some grandparents taking their kids there for a school holidays outing – it’s a relaxing spot and as I pointed out to one group – the fish can be spotted cruising close to shore.

A couple of anglers I talked to fly-fished the Opihi River Catchment.

They said it was busy with anglers, a vehicle at almost every access point.

The river was low and clear and great for spotting and stalking individual trout.

By those accounts it fished well with lots of large brown trout to target and some large fish up to 5.5-pound caught.

They both got a real treat on the day with hatches on mayfly occurring.

A hatch is when the mayfly larvae abandoned living in the riverbed stones, float to the surface and sprout wings and start flying.

This process causes a feeding frenzy for trout as in-transit mayfly can be easily intercepted. 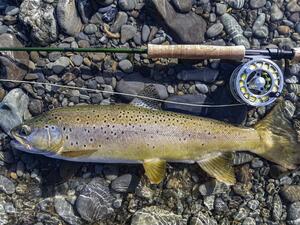 Dry-fly fishing during a mayfly hatch is considered by many as the ultimate flyfishing experience.

We had a few rangers and our media-man Richie Cosgrove up at Lake Opuha on Opening Morning.

They put together this quick Opening video.

About 75 anglers fishing on the lake for Opening and the team checked on 50 of those during the morning.

Bait, fly, spin and trolling methods all accounted for fish and it appeared the catch rate was pretty good as we have come to expect at Lake Opuha.

The mainstay of the catch was brown trout around 1-1.3kg and a few nice rainbow trout too, most anglers had caught one trout by lunchtime.

Honorary Ranger Allan ‘Dizzy’ Gillespie checked an angler that reported an impressive catch tally, 12 brown trout caught and released by 11am, all on a dry fly.

It was great to see several groups of anglers making Opening Day a school holiday activity for the kids on Lake Opuha too.

Age shouldn’t be a catalyst for getting our friends and family into or back into fishing, though.

Being a top-bloke, Allan took it upon himself to gear-up and take-out Warren Garrick for his first trout fishing trip in 43 years.

What do ya know – he got a nice rainbow.

Upon Allan’s suggestion that it should be promptly hot-smoked and served on crackers lakeside to celebrate Opening Day, Warren disagreed, reckoning that he ought to take it home intact - otherwise his wife wouldn’t believe him he caught one!

The final word of “wisdom” from me this week is simply not to delay.

October really does offer some amazing early season fishing close to home, so get into it ASAP.

If your new to fishing and need some basic tips and tricks – check out this handy webpage full of helpful resources.