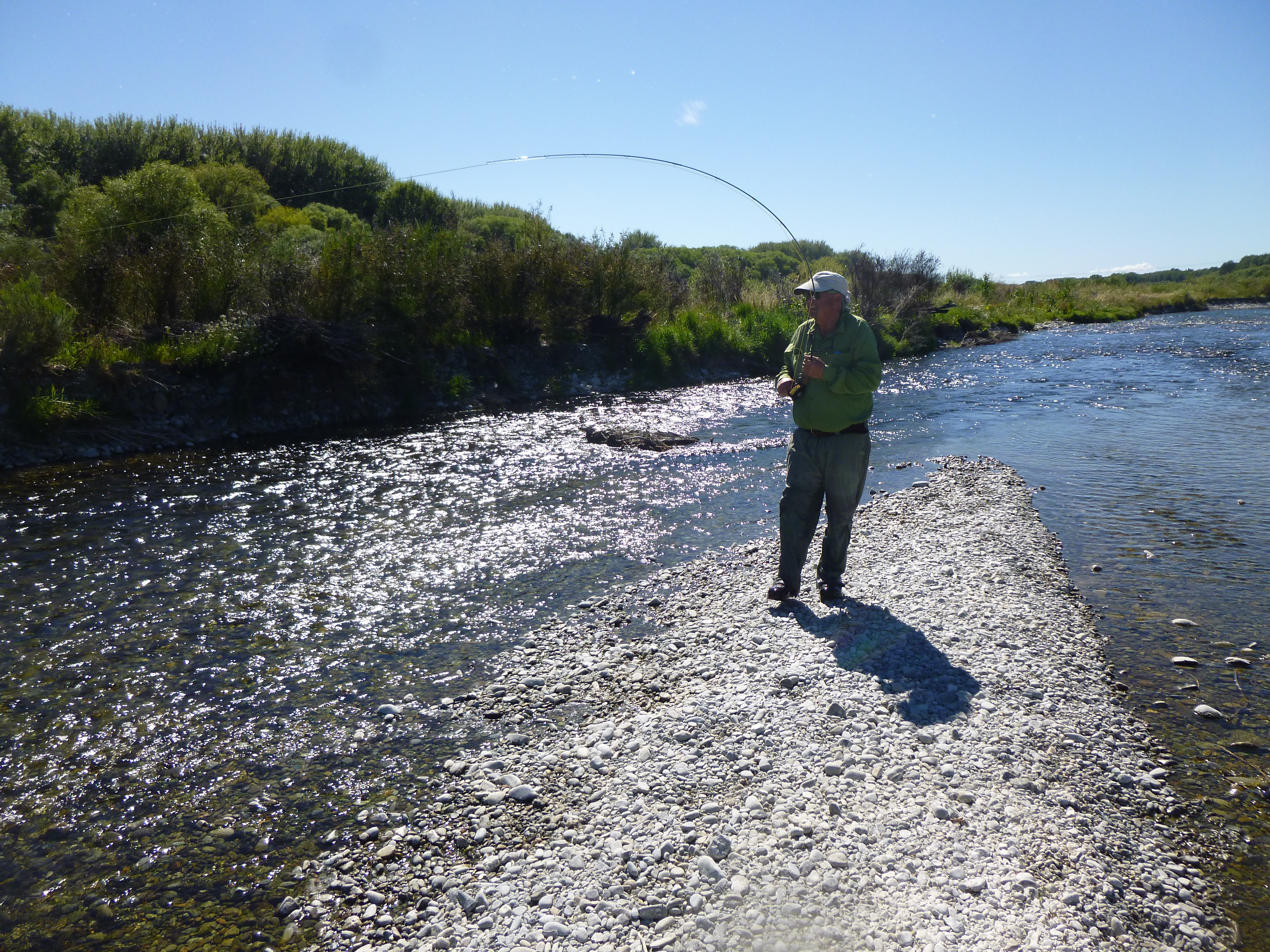 Those lazy, hazy days of summer are great for sun worshippers but can present problems for trout and salmon fishers. Those eager to feed pre-Christmas fish are but a memory as a hot January rolls into an equally warm February. Cooler days and nights are on the way but coping in the here and now can be problematic. Here in South Canterbury we have experienced more than our share of super warm days this summer.

This angler hooked a large brown in fast, shallow water with a very small nymph.

If you are finding the trout super spooky and easily panicked you are not alone. Difficult summer trout have always been a fact of life. Ask any experienced fishing guide about that! There are strategies that can be employed but before looking at that it may be worth examining why once easily fooled trout have become so super sensitive.

High water temperatures certainly don’t help. When mid-stream temperatures approach and even exceed 20 degrees fish become less interested in food. Taking in sufficient oxygen to survive becomes an imperative. Despite that I’ve sometimes been pleasantly surprised by just how warm a stream can be before feeding ceases entirely. I still recall vividly a day back in my guiding heyday that produced hard fighting fish after fish, despite a water temperature in the low twenties. My elderly French client became so exhausted by all the action that he had to wave a white flag and ask me to take him home early.

A major cause of wary and difficult trout relates simply to the amount of pressure they have been subjected to. Consider that the fishy residents of some streams are encountering anglers on a near daily basis. If they have been caught and released a few times they are especially edgy. Survival instincts soon kick in. Trout either flee at the first sign of something unusual happening in their domain or simply go somewhere and hide. Drift divers have often reported finding trout apparently sleeping tucked neatly around the underside of large boulders or hugging the bottom in areas that are hard for anglers to target effectively. I’m convinced that many trout resort to simply not feeding during daylight hours.

So what can you do to fool a few? In my experience the solution lies in a super stealthy approach and using smaller flies or lures and lighter than normal tippets. If confronted by a fish that is feeding but ignoring my offering I will invariably drop down a size rather than assume that the fish didn’t see my fly and go bigger.

This is also a time to target fast water. If fish are feeding at all they are normally cruising wide shallow stretches where they are very difficult to catch or else working right up into the white water. I have been staggered by the ‘skinny’ water that a big trout will hold in at times. Because they are hard to see does not mean that they are not there. This is a time to patiently work every possible holding position.

Nymph fishers normally employ some form of indicator; perhaps a dry fly or some form of yarn on the leader. If the going is really hard and fish spooking with the line in the air dispensing with the indicator might help. Hi-vis fly lines don’t help the cause and nor do bright, flashing tip rings. If you have a silver tip ring on your rod consider taking to it with a permanent black marker pen. Some anglers run leader and tippet through a handful of sand to help take the shine off.

At the height of summer the main problem can be fish totally fixated on just one food item. If the stream is willow-lined its odds on that the trout are feeding on willow grubs, those miniscule little grubs that drop onto the water in their thousands from the tiny galls on the willow leaves. Far be it for me to suggest a foolproof method of catching these trout as I’m still trying to work it out myself. There are some good patterns out there though. The key seems to be finding hooks small enough. We are not usually accustomed to fishing with anything much smaller than #18 or #20 hooks in this country but many U.S. anglers routinely go down to even #24 or smaller. True. And they can be effective. I have enjoyed limited success on willow grubbers by stripping the wings and hackle off a #20 dry fly and fishing it in the surface film. These fish can be hard to scare actually, seemingly oblivious to the angler. It might take an awful lot of casts but just occasionally you get lucky.  Summer fishing can be hard but it is also addictive. I love it.