Central South Island Both Barrels May 2017

Opening weekend for 2017, like 2016 was characterised by summer-like conditions. Will we ever get a decent windy southerly blast on opening…?

We had teams of Rangers in two distinct areas this opening; the farmland surrounding Oamaru, and the Mayfield/Mt Somers area.

Above Right: Chris and Hunter Wilson near Oamaru, Opening day 2017.

It may be little consolation but the rangers, at least, enjoyed the calm weather.

It was pleasing that our rangers only encountered one group of four offenders hunting a pond together near Oamaru.

All four hunters chose not to purchase a licence this season and as a result their opening weekend was cut short as their shot guns were seized while their offence cases are being processed.

Hunting game birds without a licence attracts a maximum penalty of a criminal conviction and a $5,000 fine and/or community service.

Compared to simply purchasing a licence online or at your local hunting store, hunting without one can be extremely expensive, time consuming, and leave an embarrassing blotch on a person’s reputation and criminal record.

Once again our rangers found that the majority of hunters were law abiding and switched-on with their gun safety.

Word on the water

In a region as massive as the Central South Island (CSI), with over 2,000 local game bird hunters and many more visiting it can be hard to get a gauge just how successful opening weekend was from the feedback a couple dozen hunters encountered by rangers and from hunters who provided staff with reports from around the region.

The telephone game harvest survey is the tool Fish & Game use to get an estimate of just how many birds were harvested around the region on opening weekend and throughout the season.

So thank you for taking the time to answer your phones and letting us know how you got on.

Opening reports from the maimai’s were mixed many were saying the weather was too calm, and although there were reasonable numbers of birds in the air they just weren’t coming into the decoys like past years.

A few hunters in the Mackenzie Country were claiming their best hunting in years but for many they didn’t harvest as many birds as they hoped for.

In the Central South Island opening weekend bag of mallard and grey ducks have fluctuated between about 10 and 16 birds for the past 10 seasons.

For 2017 harvest was close to 10 birds which reflects the comments of many hunters in the field. The rate of harvest was around 1 mallard for an hour of hunting, which is pretty good in a national context.

Of the 160 hunters surveyed none recorded a daily mallard bag limits of 50. If you harvested more than 15 mallards for the weekend you were doing better than most.

Paradise shelduck hunting was pretty good this opening with an average of three harvested for the weekend.

The odd swan, pukeko or shoveler was accounted for resulting in a total weekend bag of around 13 game birds.

The number of hunters that went home empty handed in 2017 was opening was relatively low, at around 3%. Game bird dinners will be getting enjoyed through winter.

A fair few hunters put away the gun after opening weekend but the reality is that June can be a great month for game bird hunting.

With a bit of effort to locate birds before the hunt it’s not unusual to find better hunting action than what opening weekend offers.

Near average numbers of parries and mallard were counted in our annual pre-season population surveys so it would be anticipated that there will be plenty of opportunities to harvest some birds through the remainder of the main season.

Ever wondered if a chef could cook your duck better than you or your spouse? Well, wonder no more. 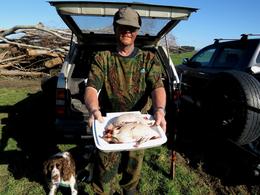 This season, select a couple of your best birds, pluck em, gut em and drop them off at a local restaurant a day or two in advance and let the chef work some magic.

What we are talking about here is the game bird food festival and Braided Rivers Restaurant and Bar in Ashburton and Fusion Café and Bar in Timaru are offering the festival experience for the 2017 game bird season.

To find out more about the game bird food give the restaurants a call and check out the festival website click here.

The next meeting will be held on the Thursday the 15 of June at 7pm.

The council is made up of elected local licence holders who volunteer their time and energy.

The council meetings are open to licence holders and the public.

If you wish to address the council please ring the Fish & Game office in advance of the meeting to notify your intentions to speak and your topic; 036158400.