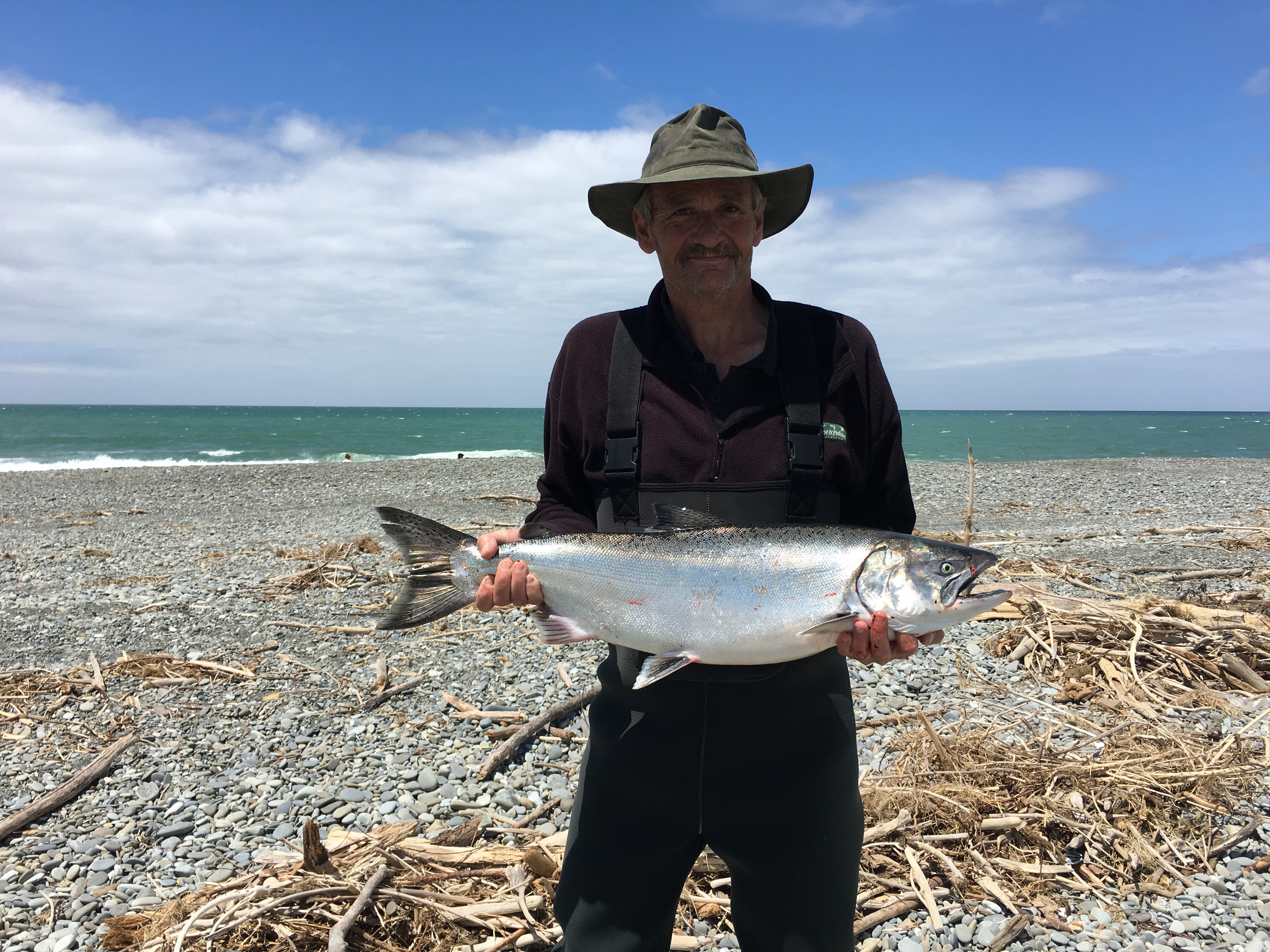 It is the month for dry fly and salmon fishing in this part of the world.

Salmon have been caught in the Rangitata, Opihi and Waitaki rivers during January, albeit in low numbers.

The fish have been in great condition this year, usually between 12 and 16 pounds.

There is some optimism that this season will surpass recent ones for salmon catches, but we'll have to wait an see how it plays out.

Is there anything more unpredictable than a salmon run?

Above right: Shelton Tipper and his Opihi salmon from the surf (Photo Paul McLaughlan).

It is at this time of year that big 'ol brown will let their guard down and smash your dry fly, even on a poor cast.

For this reason, anglers are willing to hike way back into the high country at this time of year, and seek out those “untouchable” browns.

If you haven’t bought your licence yet, grab your credit card and get one online here.

Alternatively, pop down to your local fishing shop and pick one up with some new fishing gear.

Waiting for a world record

Stories have emerged that an angler caught a brown trout of unmatched proportions at the Pukaki-Ohau A canals recently.

The unconfirmed report is that the fish caught recently is a whopping 55-pounder, eclipsing the existing world record.

The current IGFA all-tackle world record is a 42.1lb brown caught in 2013 in the Ohau canal.

Many anglers have been waiting for the day when a 50 lb-plus (22.6kgs) fish would be caught at the canals, but few would have guessed it would reach 55lb!

We tried to find out more about this amazing catch, but it's become apparent that the angler who caught the trout wishes to remain anonymous and withhold evidence for the time being.

We are told that the lucky angler will provide evidence of the catch once the fish has completed taxidermy.

Let’s all respect the angler's wish and just wait patiently to see the world record beater when they're ready to share it with us.

Meanwhile, if you’re up for a challenge, the current IGFA all-tackle world record for a rainbow trout is 48lb (21.7kg).

Want to troll for salmon? 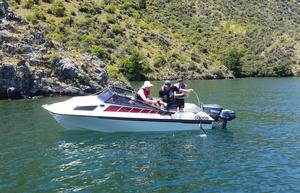 A salmon comes to the net on Lake Benmore (Photo R Adams).

During ranging trips on lake Benmore this summer, our team has been surprised to see just how good the salmon fishing has been.

Trolling at depth has been the key to catching salmon.

Using lead line, downriggers or paravanes will ensure your lures get below the warm surface water into the temperatures that  salmon prefer.

Try to get at least three metres deep, but the deeper the better.

There are many good salmon lures but some anglers only use shiny silver/chrome lure with a bit of bright pink.

The best salmon fishing area appears to be the deep water gorge areas downstream of the Ahuriri arm and Haldon arm and right through to around the Benmore Dam.

Most of the salmon have been around 1-2lb, and many have been 3-4lb. A few large specimens up to 9lb have been landed. 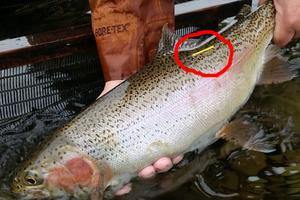 A big thank you to all you anglers who reported catching tagged trout over the holiday period.

In total, anglers have now reported catching 21 tagged trout in the Waitaki and 13 in the Hakataramea River.

If you still have a tag to report, please contact our office with the number, capture location, and tell us if you kept or released it.

The tagged fish have been caught as far downstream as State Highway 1 in the Waitaki and up to the Waitaki Dam.

They have been caught through the full 50km length of the Haka.

If you do fish the Haka or anywhere in the lower Waitaki River catchment this season, please keep a keen eye out for these tagged trout.

The tags are a strip of yellow plastic positioned near the dorsal fin. 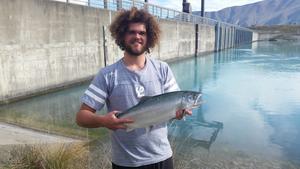 The canals are a unique fishery and endlessly popular.

Every type of angler can be found there, from first-time visiting from the North Island, to fly fishing purists from the deep south with 60 years of licence-buying history.

Whoever you are, please keep in mind we need to look after the place and be tolerant of each other.

The Tekapo Canal is owned by Genesis Energy while the Pukaki and Ōhau canal chain is owned by Meridian Energy.

Be considerate of others – the canals are popular so you will encounter other anglers, and often in close proximity.

Anglers use a range of fishing methods and styles at the canals, which are not always compatible with how you intend to fish.

Be courteous when approaching anglers who were there before you and ask if it's okay to fish close to them. If not, please find your own spot.

Drive to the road conditions and stick to the speed limits.

Speed limits vary throughout the canal system and many of the roads are narrow, unlit and offer no berm parking.

Please park off the roads or where parking is provided and walk to your fishing spot if necessary.

No camping is permitted on the canals. That includes camper vans, motorhomes, and sleeping in your car!

This rule is enforced, and campers will be required to move on based on the assessment: 'if it looks like camping, it is camping.'

Accommodation and camping is available throughout the Mackenzie Country, especially in the townships of Tekapo and Twizel.

Your rubbish and fish waste are your responsibility, which means pack-in and pack-out.

If you're fishing near the Ohau power stations, large skip bins are provided by Meridian for your use.

Do not leave fish frames and guts in the canal, wrap them in paper and a plastic bag and dispose of them in the skip bins.

Please also be careful not to snag your line in the power station intakes, as fishing nylon causes blockages to the intake screens which creates issues for hydro generation.

Note that toilets are provided on the canals and in the Tekapo and Twizel townships.

On the Tekapo Canal portaloos are provided while toilets are available and signposted at the power station buildings of the Ohau A, B and C power stations.

Signage is erected throughout the power scheme and around the salmon farms to advise anglers of health and safety issues.

Please obey all the signs and keep out of dangerous areas.

Failure to do so may result in cutbacks to access.