Our waterways and their fishy inhabitants are in summer mode - for dry fly enthusiasts this is your time of year.

Above Right: A refreshed Opihi river bed after the December rain.

All-in-all, our waterways are in reasonable condition for summer.

We were heading for a drought, but rain finally came in mid-December and in some waterways flushed out nuisance levels of algae, and in doing so temporarily restored “late spring” conditions.

Will it be a long dry mid-summer and early autumn? Let’s find out and cross our fingers for a few bouts of rain and a bit of respite from the scorching hot summer sun.

It was a great start to the salmon season at the Rangitata. The usual slow catch period over the holiday season was certainly slow and a little disappointing considering the great start.

The Waitaki and Opihi Rivers don’t get the early runs and fish best from mid-February to the end of March.

A small number of salmon have been caught in each river this January including a 22 pounder in the Waitaki.

If you haven’t been yet, February is an ideal time to dust off the salmon gear, replace old line and have a cast.

In November a local angler was aboard the Sandford vessel Ikawai as a "verifier" as part of the Salmon at Sea Agreement between Fish & Game (CSI & NC), salmon anglers' associations and commercial fishing operators.

On a multi-day trip 394 salmon were caught with 22 of these identified as wild fish by the verifier and the others identified as escapees from the Akaroa salmon farm.

The farm fish were identified by their worn tail fins, which results from rubbing against the ocean pen nets.

In mid-December, an observer was invited out on another trip. This voyage had a very different result with only two salmon caught, both of farm origin.

A summer of ranging 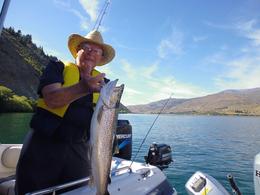 Our team of staff and honorary rangers have been active over the summer, and the newest floating  member of our team, ‘Kokanee’ the Frewza F14 boat has been put to good use on the Lakes.

Over 700 anglers were encountered across many popular waterways.

Pleasingly, the clear majority were compliant and carrying their licences.

During December and January our rangers turned up 23 offences.

Most of them were fishing without a licence, but other regulation breaches were also detected.

They included fishing with more than one rod, exceeding the daily bag limit and being more than 15 metres from their fishing rod.

In the CSI Region most offences, where the offender admits guilt and complies with the rangers request are dealt with by way of a “penalty” payment or prosecution in court.

Cases where an angler commits multiple offences, are misleading or obstructive to rangers, or use unlawful methods (e.g. spears and nets) are prosecuted in court.

In September a pair of our honorary rangers encountered an angler fishing at the Ohau B canal.

Asked to produce his licence, the angler became abusive and left the scene without complying with the ranger’s requests.

For his actions, the man appeared in the Alexandra District Court facing charges of fishing without a licence, fishing with more than one rod and obstructing a Fish & Game ranger.

The angler plead guilty and was convicted on all three charges and ordered by the judge to pay a total of $1,830 in fines and costs.

If you catch a tagged trout or salmon, please let us know. The information to collect is the tag number, colour, fish species, length, weight, and location caught.

Tags are usually located beside the dorsal fin.

In CSI there are very few tagged trout apart from at lakes Alexandrina and Macgregor where a large scale tagging project was recently completed.

Other than that we tag the occasional salvaged fish and those caught during educational demonstrations.

Up in the North Canterbury Fish & Game Region, a trout tagging project is underway so if any of these fish swim down the coast to the CSI Region we would be very keen to know.

We originally tagged the brown trout at the Raincliff camp with some school kids in April 2014.

Martin caught the same trout in nearly the same spot last November and it had grown to 560mm, 35mm longer than when we tagged it.

By the looks of it the trout lives a good life, has a few years under its belt and doesn’t get around much.

It was released so let us know if you catch it.