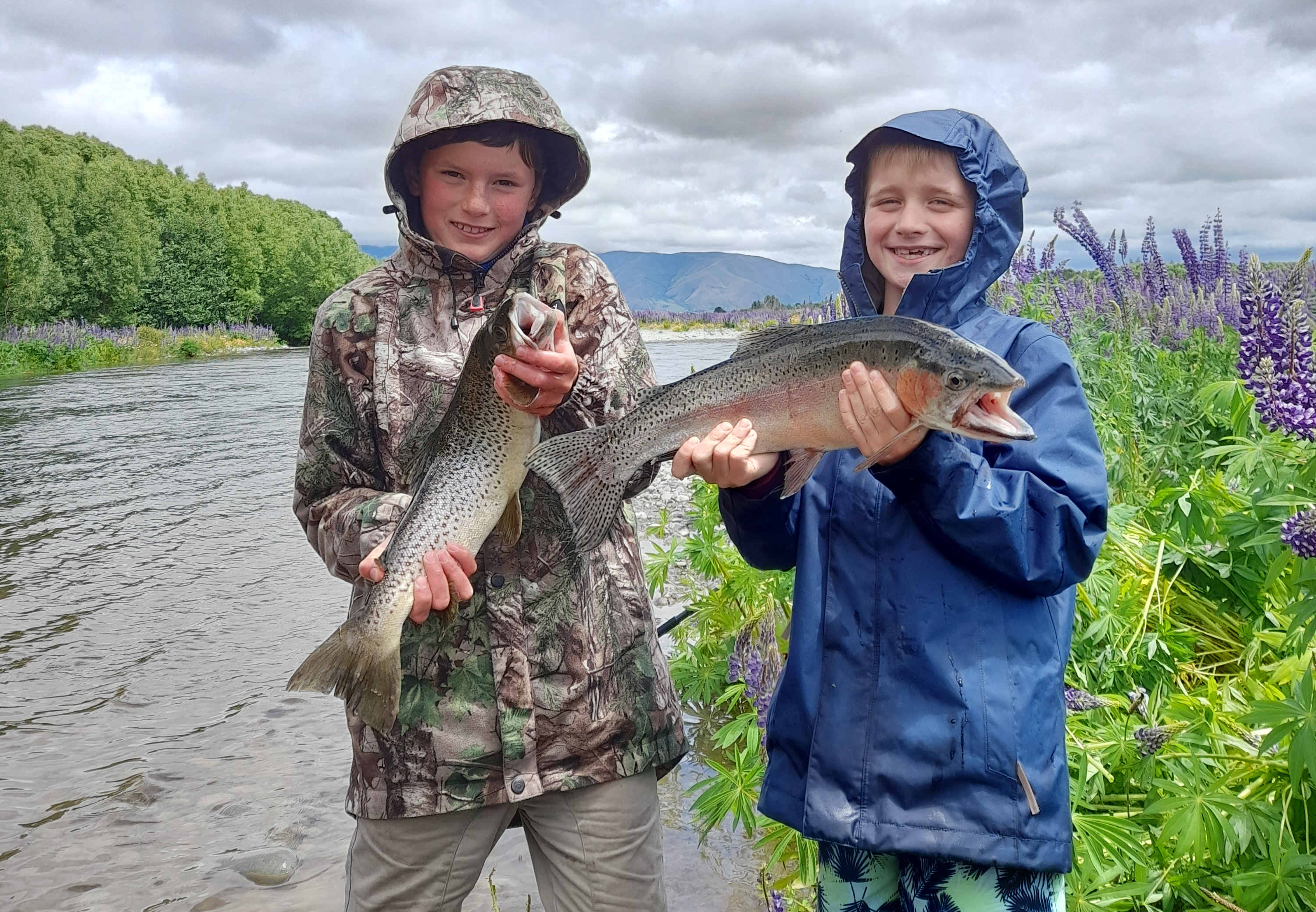 December is a great month for fishing

The first Saturday in December (4th) marks the final "Opening Day" in the CSI Region, with the upper Ahuriri River and lagoons opening.

December offers so many fishing options, from sea-run salmon to backcountry trout fishing to night fishing local streams to trolling the drop-offs at our large hydro lakes, and that is just the tip of the iceberg.

If you're keen to check out a new spot this December, you can find some inspiration from our 'Fishing Locations and Access' webpage, click here.

While familiarising yourself with the sports fishing regulations set out in the 2021/22 regulation guide, be sure to scan the list of waterways for fishing location ideas.

Above right: Finn Stevens (left) and Lincoln Skeats out there doing it in the CSI Region-Photo Hamish Stevens. 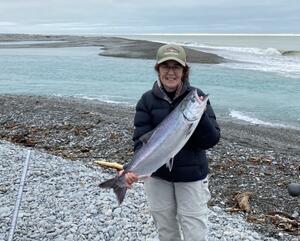 Kathy Vinten caught the first sea run salmon of the season at the Rangitata River mouth.

The first sea run salmon catch of the season was reported from the Rangitata River mouth early in November.

Kathy said she got the rewards of sticking it out on the back of the tide after the locals packed it in for the day.

This is a timely reminder to familiarise yourself with the 2021/22 sea run salmon regulations for the Central South Island and North Canterbury Fish & Game Regions.

For sea run salmon waters, it's not just a case of grabbing your licence and rod and heading down to the river anymore.

The season bag limit card must be carried with you while fishing sea run salmon waters if you have any intention to catch a sea run salmon or keep one incidentally caught while trout fishing.

All the information you need to know can be found on our website here, including how to obtain your sea run salmon endorsement and season bag limit card, free of charge. 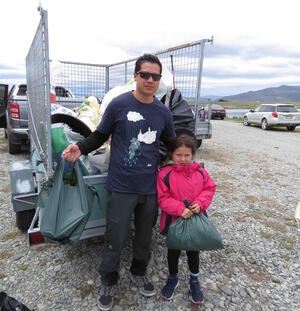 Eighty-two participants collected two half-filled trailers of rubbish from the canal banks and roadside areas of the Tekapo, Pukaki and Ōhau Canals in November.

"The canals accumulate litter from activities on the canal, but their setting in a wind-swept landscape means that rubbish 'blows-in' from all surrounding activities too", says event organiser Roger Spicer.

Central South Island Fish & Game Officer Rhys Adams says that trout and salmon anglers are the primary recreational user of the canals and can play a big part in minimising litter at the canals.

"We are encouraging anglers to add a pair of gloves and a rubbish bag to their tackle box and take a couple of minutes out of their fishing trips to pick up some litter from the canal banks", says Adams.

The event was generously supported by many sponsors donating time to organise the event, spot prizes and a BBQ lunch for participants.

Mr Spicer and Fish & Game would like to thank the event sponsors:

As summer kicks in and water temperatures rise, anglers need to be extra mindful of how any fish intended to be released are handled.

Here are our 'Quick 5' tips for handling fish with care:

In the unfortunate instance that a fish you intended to release does end up bleeding from the gills or does not recover completely, so long as you can legally take that fish, you should keep it as part of your bag limit and utilise it.

The canals are a great spot to try your luck in November.

We recommend fishing around the salmon farms as the post-spawning rainbows will be back there feeding up to regain condition.

Please note that the daily bag limit for the Mackenzie hydro canals and Lake Ruataniwha has been reduced for the new season.

Once you have kept 2 fish, you must cease fishing at the canals and Lake Ruataniwha for the remainder of that day.

Additionally, the only size limit regulation in place at the canals is a minimum size of 300mm for salmon.

If you are new to fishing the canals, be sure to check out our hydro Canal information guide – click here.

The first meeting of the newly elected Central South Island Fish and Game Council was held in November.

Steven Bannister was elected Chair, and Linn Koevoet was elected to the role of New Zealand Council appointee.

The Draft Sports Fish and Game Management Plan for the Central South Island Region was publicly notified on 16 October. Submissions are due before 5 pm on 10 December 2021. The Draft Plan, public notice and submission form can be found here.

Posted in Reel Life; Posted 9 months ago by Default Admin