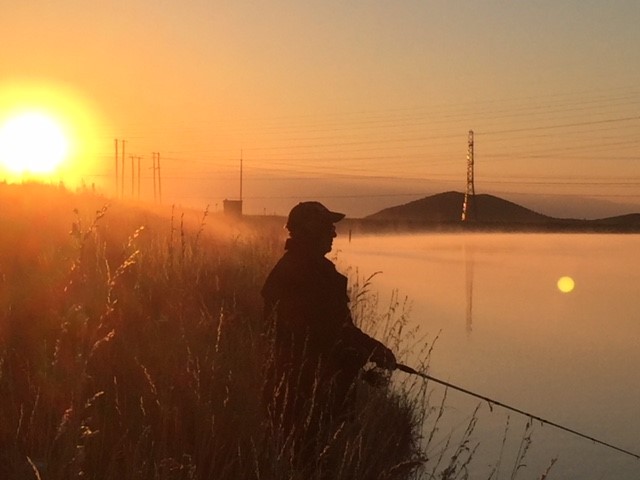 The 2017-2018 summer fishing season has been a good one: generally, mild conditions and regular rainfall gave us some of the best summer river flows in years.

A couple of blemishes on the season were the intense hot spell leading into the summer and the large floods associated with Cyclone Gita.

Above right: Time to head to the canals (Photo Cliff Burmister).

One thing's for sure though is that a wet fishing season beats a drought and with autumn flows still elevated heading into May, we anticipate that salmon and brown trout will have plenty of small streams to access and spawning effort should be well distributed.

That means their eggs will be spread among many baskets, a good insurance policy for the sustainability of fisheries.

With the end of the summer season finishing up on Monday the 30th of April, it’s time to dig out your regulation guide and familiarise yourself again with the CSI’s all-season fisheries.

You can also click here to view the online version of the guide.

A useful selection of our high-country lakes and canals are open for fishing in May. Please do take the time to read the "regs” and keep to the open water.

With your head buried in the regulations booklet, keep an eye out for the upcoming ‘winter season’ options which kick off on June 1.  These winter seasons give you more low-country options. 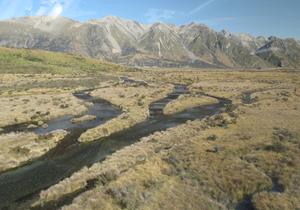 The helicopter view of Deep Creek during a spawning survey.

The size of the salmon run each year is a hot topic on the river bank, and it's no secret that over the last the last few years the runs in our rivers have been poor.

Again this season angler catches appeared to be on the low side, but how low?

When catches are low we can only hope that the fish were there, but they simply evaded the anglers, and made it to the spawning grounds to produce more offspring for future seasons.

The spawning numbers and angler harvest figures are critical pieces of information for Fish & Game to use when setting regulations and monitoring projects and initiatives.

Please anticipate a phone call or email in the near future regarding the salmon harvest survey.

Your participation is critical, even if you went salmon fishing but didn’t catch one.

Spawning surveys are currently underway and will continue through to early July.

We count both live fish and redds (nests) dependant on the waterway and resources available.

At the time of writing we've undertaken two out of five helicopter counts of Rangitata spawning waters with encouraging results.

The spawning run in deep stream has far exceeded that of last year, and for Deep Creek we are still optimistic numbers will increase over the next couple of weeks as they traditionally do. 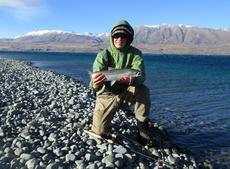 Rhys Adams and his shoreline spin fishing catch from Lake Tekapo May 2017.

Brown trout will turn their focus to spawning in May and June and there are opportunities to target these fish as they become aggressive.

Although all spawning streams are closed for fishing in May, trout can be targeted in lakes near inflowing river and stream mouths as they prepare to enter the streams.

If the lake is shallow in the vicinity of stream mouths and the water is clear, try fishing at night as the fish move in near shore under the cover of darkness.

Fishing the lake when the inflowing streams are high and discoloured and spewing silty water out into the lake can be effective too, as the fish will be attracted to this water.

Rainbow trout don’t spawn for a month or two yet so target these in lakes as per usual in May.

A fish finder on your boat may prove valuable for fishing the deeper water. Try trolling drop offs and river mouth deltas.

In shallow areas a lead line may be too weighty for trolling, so an alternative is to use a standard spinning rod with a small sinker about 1.5 metres in front of a Parsons Glory or Mrs Simpson flies.

Shallow diving Rapala lures should do the job too. Harling with a floating or slow sinking fly line will be just as effective.

Lake Benmore is a great sports fishery and is open all year. The delta areas of the Ahuriri, Tekapo and Lower Ohau rivers are go-to areas year-round with shallow mud and weed areas and deeper drop offs to target.

Lake Tekapo and Ohau offer scenic and sometimes productive shoreline fishing in May too.

Fishing for big wily brown trout appears to improve when the browns become aggressive prior to spawning in Late April through to June.

Try fishing around the farms and the top ends of the canals currently.

After the success of last year’s canal clean up, Roger Spicer a keen canal angler and member of the Halswell Men’s Shed, has announced its all go again this year on the 12th of May.

Unfortunately, not all canal users clean-up after themselves so we need to do a little more than our bit each, to ensure the canal banks stay as pristine as the high country scenery around them.

You and your family’s attendance is appreciated for just a few hours of picking up rubbish from the canal banks.

A couple of extra incentives to attend are awesome spot prizes that are up for grabs and a barbecue, all kindly donated by local and interested businesses.

Also, it’s a great time of year to fish the canals.

All participants must meet at Jakes Hardware in the Twizel town centre for registration and a safety briefing at 8:30am.