Weather-wise March can be brilliant with mild and settled weather.

So our message is get out and go fishing in March, there's heaps of opportunity and boot shorts-style fishing and camping out are still great options.

March is the last month of the sea-run salmon season.

It has been a slow season this year with low numbers of fish caught and plenty of days where the river conditions havn’t been ideal.

Hopeful anglers will be banking on March to produce the goods.

Many angler believe this is the best month of the fishing season, and if last year's was any measure that is especially true for the Waitaki River.

Small streams and rivers are now in low flow mode and lend themselves best to fly fishing.

Be sure to take a gentle approach as most fish would have seen their fair share of anglers, swimmers and dog walkers this season and will be prone to being spooked.

If a good hatch occurs they may let their guard down and feed with reckless abandon.

The canals are fishing as expected; big trout frequently caught by a handful of skilled or lucky anglers and the occasional ‘break-out’ of salmon.

The last known break-out occurred mid-February in the Pukaki-Ohau canal.

By the time you read this almost all of these fish will have been caught so if you’re lucky you will time your trip with another break-out.

Above Right: sockeye males are easily identifiable by their red body colouration.

The sockeye run occurs in mid-March and the size of the run fluctuates wildly from year to year.

Like all Pacific salmon, sockeye die shortly after spawning.

These fish are on their spawning run so fishing for them in flowing water after the end February is not allowed.

You can still fish for them in the Waitaki hydro lakes year round.

We expect that sockeye will run up the tributaries of Haldon Arm on Lake Benmore.

If you're trout fishing in the Mackenzie Basin and see mobs of sockeye salmon, we would like to recieve your observations, especially; where, when and how many fish you spotted.

Fish & Game is committed to ensuring the sustainability of the Waitaki salmon fishery and as part of an agreement formed between Meridian Energy Ltd and Central South Island Fish & Game, a joint salmon project has been underway since 2010. 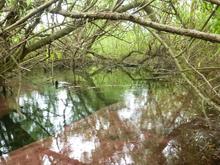 Left: A section of Lower Black Point Stream where willows needed to be removed.

The project aims to increase the natural production of wild juvenile salmon by enhancing salmon spawning and rearing habitat in stable side braids of the lower Waitaki River.

One of the main jobs to complete is to enhance the salmon spawning habitat in these side waterways of the lower Waitaki River, by mechanically removing willows and other vegetation that impedes flow.

When flow is impeded by branches, roots and whole trees growing in the water, it slows up the flow and allows silt to settle on the gravels that salmon use for spawning.

Spawning gravels smothered by silt can be very unproductive as eggs laid down by salmon receive life-giving oxygen from water that flows through the gravel. Silt blocks this water flow by filling the gaps between gravel.

This February two weeks of tree removal has been completed with the help of the ECan river engineering team.

A week of work went into Lower Black Point Stream and another week at the stable side braid that flows between the Oteake and Otekaieke rivers.

Have you fished the upper Ahuriri River and associated lagoons and tarns upstream of Longslip Creek (Birchwood Rd turnoff) this year? If so, we'd like to hear about your experiences!

An online version of our upper Ahuriri angler satisfaction survey can be filled in after your day's fishing by visiting our website: click here.

We plan to use this information to ensure that anglers remain satisifed with the high quality back country fishing on offer.

The Central South Island Fish and Game Council hold their council meetings on a bi-monthly basis and licence holders and members of the public are welcome to attend.

The meetings feature a 'public issues' forum where members of the public can address the council.

If you wish to speak we ask that you call our office to tell us what your topic is.

Council meetings are held in at the Fish & Game office in Temuka.

The meeting dates, times, and location are advertised on the Fish & Game website. Click here for more information.