Otago Fish and Game Council is calling on the Minister of Lands Louise Upston to intervene in the tenure review of a Crown-owned Otago station until public access to the property is better protected.

Hukarere Station is a Crown pastoral lease in West Otago bordering the Pomahaka River which is important as both a trophy brown trout fishery and spawning ground. The sprawling station covers 7,177 hectares.

The tenure review proposes retaining about a quarter of it – 1,696 hectares - for conservation purposes and freeholding the other three quarters of the land. 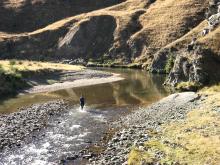 Mr Watson blames Land Information New Zealand – LINZ - and the Commissioner of Crown Lands for failing to make proper provision for public access to the property and river.

“LINZ and the Commissioner are the problem. They place a very low priority on public access in tenure reviews and claim to have legal opinions to support that position,” says Mr Watson.

“The present access deal is lopsided and the public is losing out, yet LINZ is deliberately thwarting Fish and Game’s attempts to become fully involved in the process.

“Tenure reviews should look after both the public and private interest. The Conservation Act clearly identifies Fish and Game as the statutory managers of trout fisheries and if we didn’t protest about this lopsided deal we wouldn’t be doing our job,” he says.

Otago Fish and Game Council is now writing to the Minister of Lands, Louise Upston, urging her not to fund the Hukarere tenure review until better public access provisions are included. Niall Watson says the tenure review of Hurakere should be an opportunity.

“The Government must realise that outdoor recreation, conservation and public access are of vital interest to the public. The Minister needs to look no further than the extraordinary success of the campaign to purchase Awaroa Inlet in the Abel Tasman National Park for all New Zealanders.

“Yet here we have a little bit of Otago backcountry that is going in the other direction, into private control thanks to government bodies like LINZ.”

“The irony is that Hurakere’s present landholders have always been reasonable in giving access to the public,” Mr Watson says.

“Fish and Game wants the tenure review to provide long term public access to and along the Pomahaka River. We need to look 50 or 100 years into the future, and to get something certain, practical and enduring,” he says.

Niall Watson says if the Minister of Lands or Government want good public access outcomes out of tenure review, they need to change the low priority LINZ gives to public access.

“Fish & Game is worried that the public is not going to secure good access to the Pomahaka River through Hurakere Station because LINZ has decided it is of little value.

“New Zealanders deserve much better – after all, they are the underlying owner of the station land and the tenure review is supposed provide for conservation and recreation where land tenure changes occur,” he says.