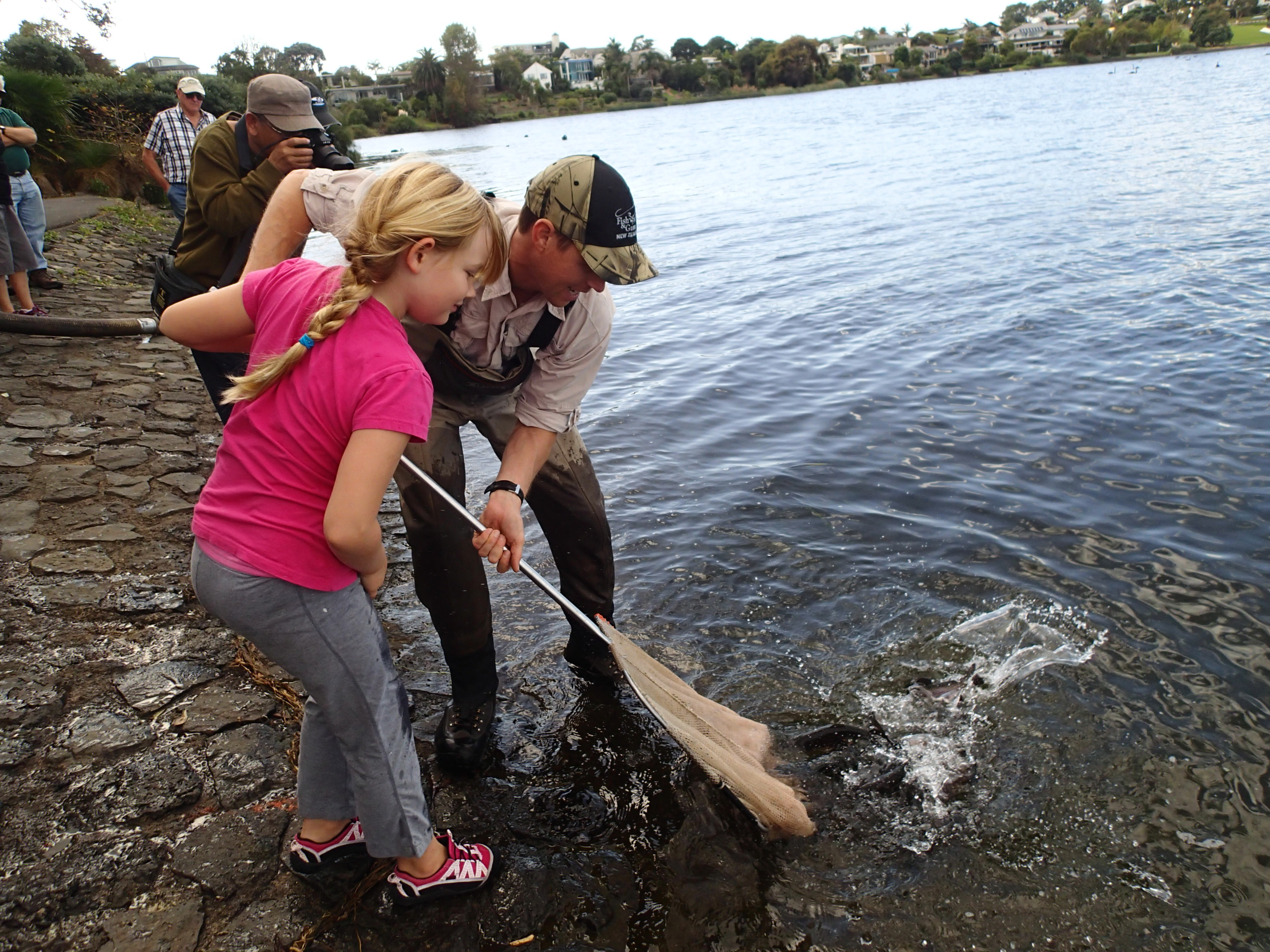 Holidaying school pupils are invited to Auckland’s Lake Pupuke for some school holiday entertainment of a very different sort – the chance to help ‘Daisy the fish dispersal Labrador' with Fish & Game’s release of trout into the lake.

More than a thousand trout will be released into the lake at Sylvan Park on Thursday (April 19, 2018).

Right: Adam Daniel gets a hand at last year's event.

The star of the show is Daisy, who helps disperse the trout into the lake.

“Daisy helps push the trout into deeper water away from where they are released to prevent the local shag population turning the trout into a quick snack,” Dr Daniel says.

“We welcome all children wanting to come and help Daisy chase the trout to safety”.

Adam Daniel says the trout release is in answer to requests from parents and grandparents looking for outdoor entertainment for kids over the school holidays.

“Fish releases at Lake Pupuke provide excellent entertainment as hundreds of trout are released from the trout transporter truck.  They spill into the lake, darting in all directions,” Dr Daniel says.

The young trout often end up sheltering on the lake’s edge giving plenty of opportunity for children to see and touch fish, which aren’t harmed by the contact, he says.

Dr Daniel says this year’s event has been kindly sponsored by Pure Fishing NZ so there will be some great spot prizes for the children who attend.

Members of the public are welcome to attend from 11am on, with the release scheduled for around mid-day on the edge of the lake in Sylvan Park next to the Madloop Windsurfing School.

Adam Daniel warns parents bringing their children to the event to expect them to be excited.

“Most kids can’t resist touching the fish and helping Daisy – some even get in the water to swim with the fish, so plan for wet and dirty children by the time the release is completed,” Dr Daniel says.

The fish release is timed to help stock up the lake for the annual Lake Pupuke Challenge Community Fishing Competition to be held at Sylvan Park this Sunday, April 22.

Adam Daniel says even before the competition begins, parents and caregivers are encouraged to give trout fishing a go at the lake in the holidays.

“Trout can be caught from the lake edge using spinners, soft bait or fly casting following the release. But even younger anglers who haven’t learnt to cast can take part.  My advice is that they may have better luck using bait suspended under a float,” he says.

Dr Daniel says while anyone fishing for sports fish like trout needs to have a valid licence,the good news is that the licence is free for children under 11.

And for juniors aged from 12 to 17, the licence is available at a reduced price.

Fishing licences can be purchased from most fishing retailers or online.