Putting a good meal on the table begins the moment you shoot the duck (pheasant, goose, etc). It’s essential that your game meat be kept cool. If you leave them in the hot sun all day, probably even the dog is going to turn his nose up at them as the meat will not only be green but pong as well!

Keep them cool by hanging in the shade. Do not leave them in a pile as the heat gets trapped and will spoil the meat. Hang them by the head, not the feet, as this keeps any gut seepage away form the breast meat. 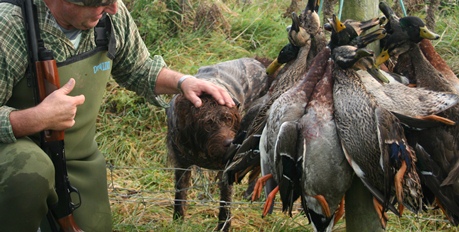 In a maimai, look for the cool side to hang game and shift them if the rising sun should start to fall on them. Don’t pile them up as this traps heat and again, they can go green.

An old trick is to take a strip off a flax leaf, thread this strip through the ducks beak, through its’ nasal holes. You don’t need to tie a knot if you run the flax round the beak and back under itself. Two ducks tethered this way fit over a nail easily and the air around them quickly cools the meat.

Don’t throw the birds in the punts’ bilge water. It tends to matt their feathers down and makes them less pleasant to deal with later. Any outboard fuel sloshing around could also taint the meat. Same too with a Landrover deck that’s covered in diesel or the like.

If you’re not able to process the birds soon after you get home, hang them in a cool spot out of the sunlight until you can. Forget about all you’ve heard about hanging game for weeks. In “the old country” people would reputedly hang pheasants until the body fell off the strung up head. Perhaps if there’s snow outside the whole time, we might get away with such practices too, but in more temperate climates, a few days is the max.

Sniff the meat when you process it. If it doesn’t smell appetizing then, it’s not likely to get much better before cooking, so don’t put the processing task off any longer than strictly necessary. This is especially the case with pheasants that have been hard hit up the backside. If the released gut juices start to percolate the body cavity it’ll take on a distinctive smell that’ll never leave.

Gut that bird as soon as possible even if you don’t pluck it until later.