Most people just breast ducks and other game birds, as this uses most of the edible meat. But it’s not a bad idea to know how to breast should you need to. That way you can select your prime drakes and pluck them for special recipes. 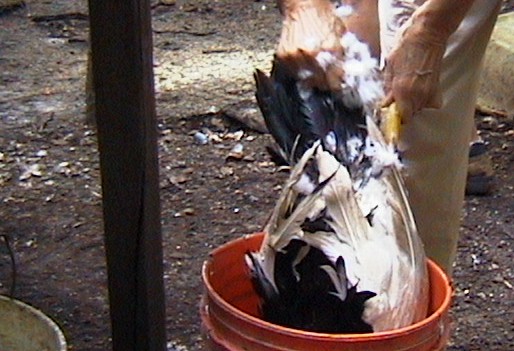 Pluck as soon as possible – preferably that day.

To pluck, simply pinch a bunch of feather between thumb and forefinger and pull against the grain. Repeat until finished! Most people start on underside, and only pluck to the first wing joint.

To remove pinfeathers, (the small white fluff under the outer feathers), there are several options. Granny would have rolled up a newspaper sheet and lit one end. By playing the flame under the suspended bird, the fluff is singed off. Do this in a safe place as all too soon the burning paper will be not much longer than your fingers! While this measure does at a pinch, in the 21st century we can do better. For instance, by using a small propane blowtorch of the type most hardware stores sell, or even one of the older pump-up kerosene blow torches. A gas camper cooker will also do the job and it’s a handy thing to have in the maimai for making hot soup & coffee as well.

An alternative to plucking the whole bird is to ‘breast’ the bird to take most of the usable meat for casseroles, stir-fry, or other flash dishes.