Auckland / Waikato Both Barrels May 2017 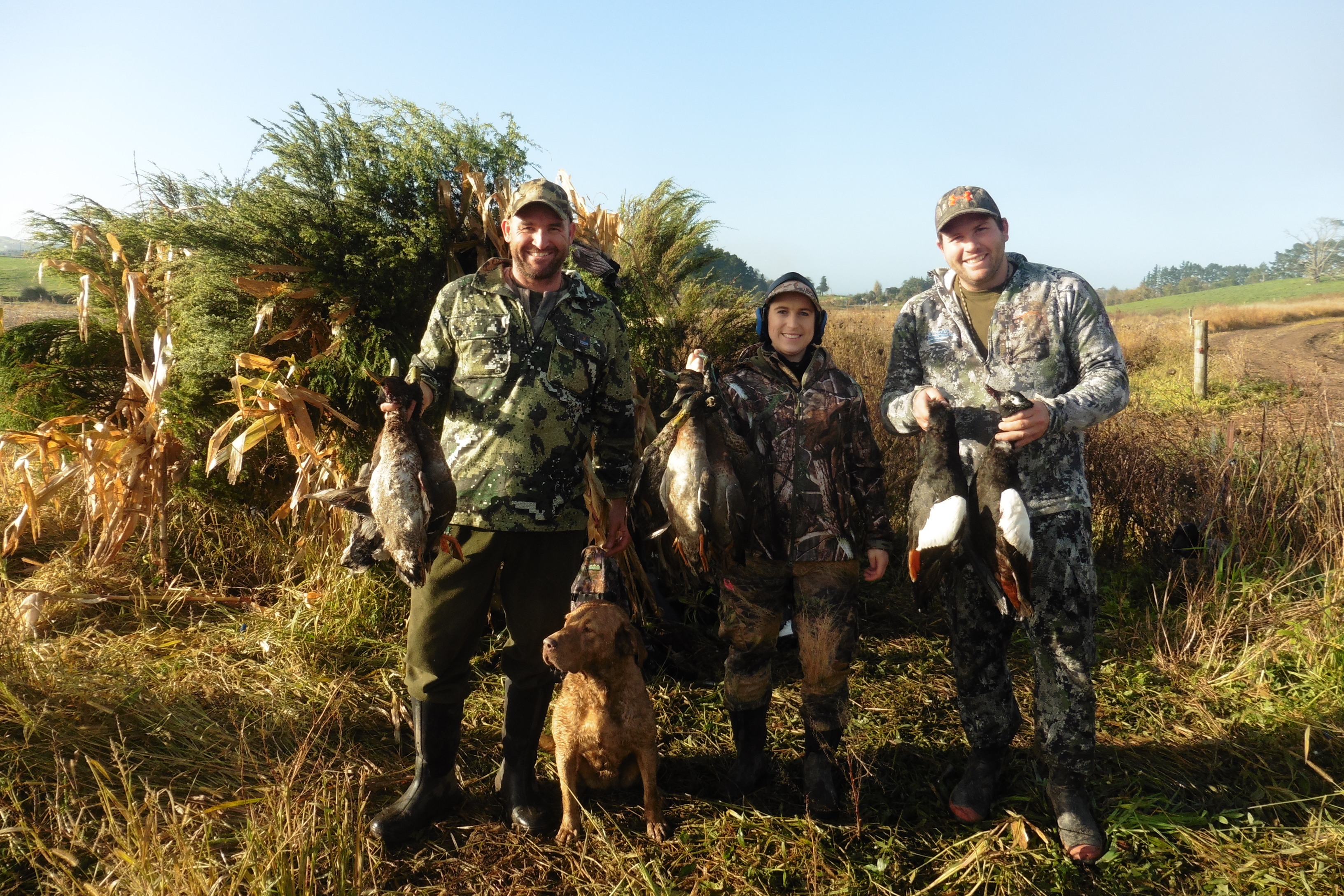 The game season has got off to a good start in the Auckland/Waikato and we’ve had encouraging reports from most parts of the region.

Many hunters we’ve spoken to have described it as the best season in recent years especially in some parts of the Waikato Delta and the Whangamarino Wetland and especially much of the Hauraki Plains.

Above Right: A successful Opening Day for these Auckland/Waikato hunters.

Of course, there are exceptions to every rule.

Much like the rest of the North Island conditions were clear, calm with a side of fog.

This made it hard for some, but with all the pre-season rain leading to full wetlands, paddock water and flooded maize, those that found where the birds wanted to be had some of the best hunting in over a decade.

The first pond one ranger team checked had already packed up and on their way out at 8am with the combined limit of 40 mallards secured.

Fog was a problem for Lake Whangape’s hunters but just off the Kaipara Harbour, for instance, a flock of geese lost in the fog mistook a lone goose caller for their buddies and 7 are now sharing freezer space with 14 ducks.

That pond’s shooters were ecstatic.

Although bags around this Harbour were sometimes light, there were several thousand ducks rafted up just off shore along with 300 geese – and there are photos to prove it, hunter Nick Marshall showed staff photos of them out there.

However, without a good wind to stir them up on the day, that’s where they stayed.

Some of the guys who were unwittingly close to these birds had to make do with a few ducks and even pukeko and a peacock!

On the Hauraki Plains, however, the first few shots of the season sent all the birds sitting on one of the rivers there up into the air – fully 3,000 of them according to one reliable witness.

The many good bags around the area reflected this.

Prior to the season we emphasised to rangers that they must seize shotguns when issuing offence notices and as a result roughly 20 hunters were left without the means to continue their offending.

At Duck Nights we tried to get the message out beforehand that, you need a licence not an excuse.

Likewise, it’s no use hunters trundling out a story about “meaning to have the shotgun plugged, only loaded it with 3 etc,”  it sounds like a broken record.

There’s no excuse either for using lead shot in a 12 gauge.

Likewise being at some remote farm pond is, if anything, actually likely to attract rangers.

For instance, we’ve used binoculars, Google Earth and GPS to find hunters way in the distance and followed it up with field checks.

One hunter boasted he never sees a ranger and never buys a licence.

He wasn’t easy to find, it took an hour to walk in, but he and his mates certainly had a licence when we called.

We still have problems with pond feeding, it is illegal in this region and that’s to let the ducks recover, same with the plugged guns.

People blazing away were pricking ducks which is just a squanderous waste.

The 3-shot rule is to save your resource to make sure you have plenty of birds to hunt in future years.

Most gun shops will plug your new or second-hand gun for you at no cost, or charge a modest $25 for the quarter hour it takes, if it’s not one they sold.

Most new guns have a plug in the box because it is required in many of the countries these guns are sold in, such as the USA, Canada and the UK.

The change to 3-shot and the ban on pond feeding were both requested by Auckland/Waikato hunters and both have had good support in randomised hunter surveys done since.

You get out what you put in!

Being on or near maize stubble was a pretty good magnet and if anyone could call as birds flighted in to it, they could peel them off beforehand.

One thing that kept occurring was that hunters who hadn’t put the time into gun-dog training were missing opportunities, for instance, rowing out to fetch their ducks and scaring off more incoming mallards – all while the pooch watched!

Those that had had well trained and/or experienced dogs were boasting not many if any got away.

There must be a message in that somewhere!