'Strange weather but some good bags'

We've had just about everything from troublesome fog on the Waikato lakes, water galore of course, and also dead calm days (on the weekend!), with gale-force winds a day or two before - or after.

In spite of all this, keener shooters got out and made the most of it.

A few have been finding ducklings already, presumably also due to the odd weather.

Some hunters reported it was their best season for some time, but others said it was actually their worst!

Mind you, the latter admitted that there were plenty of birds around right up to opening.

How do birds know it’s time to vanish?

We have to assume these birds were diverting into flooded paddocks and/or maize crops, and leaving some hunters in their time-honoured posies ignoring the altered bird movements and wondering where they all went.

Likewise, we find pairs swimming around ponds now just days after the season as if they’re in a public park.

Who told them it was all over?

Of course it isn’t over just yet for other species, so check your regulation booklets to make sure you know what restrictions apply locally.

You might be also be surprised to know that the Northland, Wellington and Taranaki seasons for mallards continue until July 2nd.

With all the extra hunters in our region, we’re not in a position to be so generous.

There has been some concern expressed in other regions that our hunters may be invading their territory, but whenever we’ve checked travelling hunters it's nearly always been driven by long-time friendship and family connections. And of course we have hunters from other regions visiting us too, in similar numbers.

We’re pleased to say the feedback from them is that they all enjoyed themselves.

One thing very noticeable this year is that everyone seemed happy just to be out there hunting with their mates.

The barbecue was often the highlight of the day.

We are sworn to secrecy about where, but one public land hunter boasted that he and four others in our region on opening had 70 between them by lunchtime Sunday – 19 of which were shoveler! 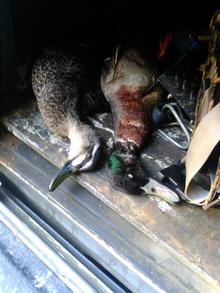 They were just one short of their collective spoonie limit.

That must be some sort of record.

Shoveler may not be our biggest game bird, but they’re certainly tasty.

Nationwide counts by Fish & Game in August each year indicate their population is healthy and stable so don’t be afraid to add one to the bag if it flies by.

In fact, we often count more than 2,000 shoveler in August in one big super-flock at the refuge on Lake Waikare.

This is just part of our national shoveler census contribution.

Lastly, if planning a new shotgun purchase for 2018, keep in mind that the lead-shot exemption for sub-gauge is on the way out.

This will be phased in over the next three years, so 2018 is “education.”

The following year, 2019, will be no sub-gauge lead allowed on F&G and DOC land over or near a waterway.

The year after that, 2020, will no lead shot over or near any waterway anywhere, exactly the same as it is for 10 and 12 gauge users now.

That phase-in period should give retailers enough time to stock non-toxic (i.e. steel shot) for 20 gauges.

Some supplies of bismuth for 16 and 28 gauge may be made available but if so it will be pricey.

The problem for older guns is that they're often not steel-shot suitable and cannot be modified to be.

Many non-toxic alternatives are not safe for their older barrels and some new developments that are, such as ITX shot, are simply not on sale here in NZ.

Now is a very good time to ask and get advice rather than wait until the last minute to make the necessary adjustments.