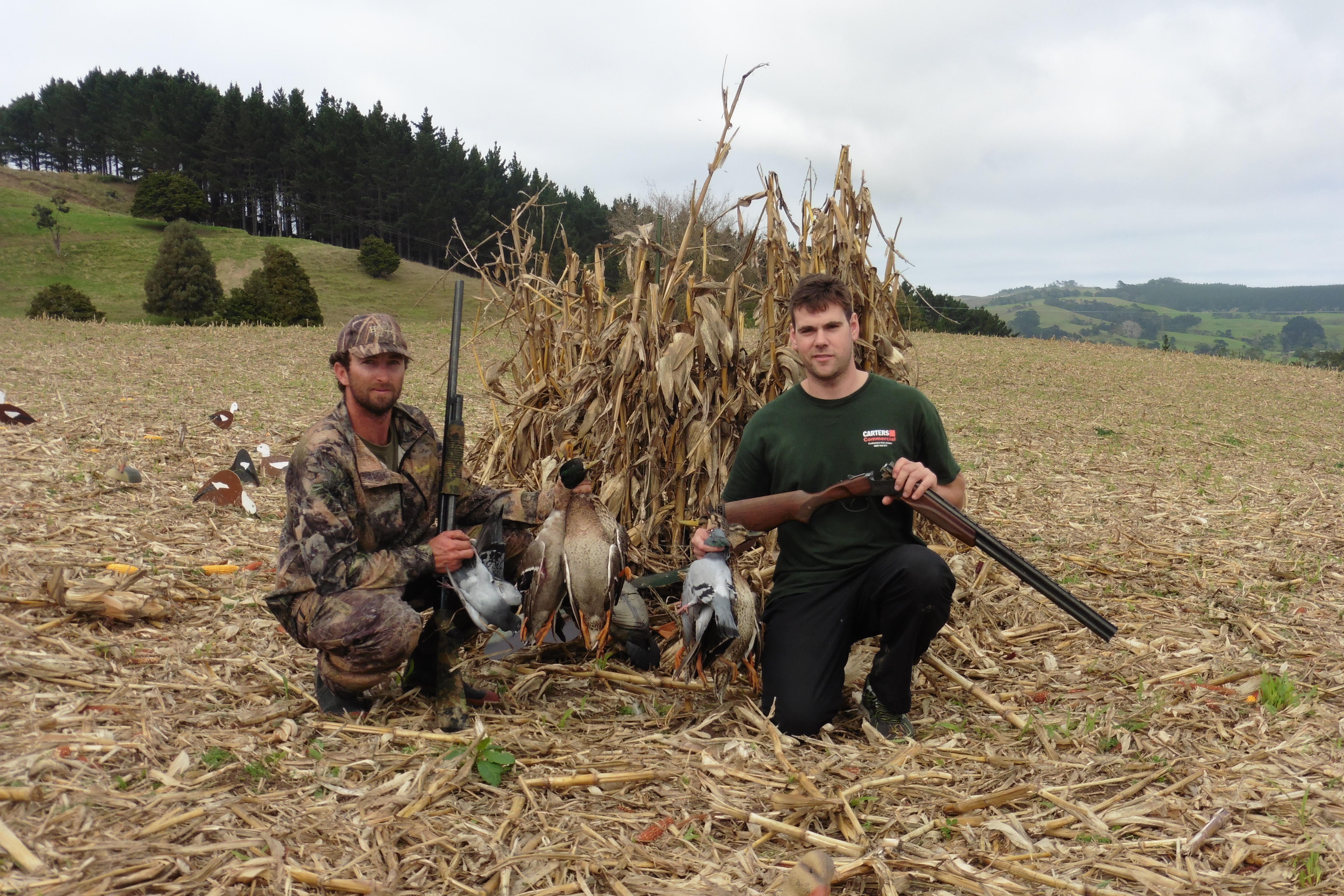 The long wet spring meant a lot of ducks were breeding long after they’d normally be finished.

Waterfowl are flexible about this when conditions are right. As a result, there’s a lot of hunter optimism over the season just ahead in all the many districts that have witnessed this.

Be aware that if you go out in the boat to dress the maimai and don’t count heaps on the way, it doesn’t mean they’re not around.

Success on last season's Opening Weekend in the Helensville district.

In fact, last night I could hear more quacking going on than your average Duck Commander video.

When I went to investigate, it was clear that hundreds of ducks were chowing down on all the drowned earthworms and similar on the edge of the flood waters in a quiet, rank, flooded paddock surrounded by kahikateas.

The sight of me approaching on the stopbank sent a fair few of them back to the nearby delta, but hundreds more continued to noisily gabble away in the gloomy dusk.

Dozens of geese in noisy parties then flew over me on my way back to the 4WD, mostly all in easy range and even a couple of “black bombers” tried a low pass.

Likewise, when we were banding we saw very large mobs of ducks helping themselves to an unprotected silage heap face, in addition to all the many hundreds at the Aka Aka banding site less than 1km away.

Interestingly, when they were disturbed, these two groups flew in quite separate directions, though both back to their delta islands base.

Keep in mind that whenever there are flood waters, the ducks might very likely be on them.  So be flexible about where you’re hunting.

The big flood’s waters are receding as I write this.  In fact, in some areas, such as around Ohaupo, levels are getting well back to normal.

Fence posts that were nearly inundated at Rangiriri by the Waikato River for the last couple of weeks are now starting to reappear.

The flood gate that was holding water back in Lake Waikare, for instance, is now wide open allowing levels to drop.  With more fine weather forecast, hunters there might not need to shoot off their maimai roof after all!

Don't forget that upland game birds can be hunted until August 28.

Marking up seems to have passed without serious incident. We have advised hunters that it’s better to mark up late than risk drowning.

Those with F&G block balloted ponds cannot be usurped in this way, so should put common sense first.

Some hunters elsewhere have forgotten their sportsmanship and tried to take advantage of paper-claim tags having an expiry date on them.

They have tried to take long-held ponds by putting their own plastic tag in its place.

In fact is the date is little more than a recommendation and probably has no standing in law.  If a maimai was marked up by a paper or by a plastic tag makes little difference, provided it was legally marked up in the first instance.

Once this has been pointed out, these stand disputes have generally ended amicably.

The main reason for asking people to replace their paper tag with their plastic one is to avoid double-tagging; marking up two spots with one licence.

If anyone knows of any such instances, please let us know and we’ll investigate promptly.

Also, the plastic tags have much more chance of lasting until the following year when once again people are looking for that “untagged” spot.

Please read your newsletter and make yourself familiar with 2017 rule changes.  Don’t forget that rangers are looking for lead shot, unpinned guns, fed ponds and people with excuses who should have licences.

If in any doubt, for instance, about the landowner licence exemption, contact F&G Hamilton now, before it all goes pear-shaped.

Good luck, warm barrels and take care out there!