You are finally free to fish!  It is time to make the most of summer if you are traveling don’t miss out on fishing. Nearly all the rivers and lakes south of Hamilton have sports fish in them.  It doesn’t matter if you have a day or week to enjoy our amazing rivers there is a spot out there waiting for you. Your fishing licence can be used all over the country (aside from Taupo). For those of you traveling locally the Waikato Region and Whanganui headwaters have great fishing and camping practically on your doorstep.  Our website has some great fishing travel ideas with literally hundreds of fishing locations to choose from.

We have all been cooped up too long so please remember to take care of yourself and try to enjoy the summer and Christmas break.  With the Waikato boundary open and international anglers still absent this season will offer New Zealanders a great opportunity to enjoy some of the best fishing in the world. The vast majority of anglers that fish the Whakapapa, Wanganui and Ongarue have been stuck at home for months so if you have not had your “opening day” yet now is that time.

Your licence not only helps our dedicated staff protect our rivers for future generations it also gives you access to some of the best fishing advice you can get.  Our staff are available to point you in the right direction to find fish or to help you plan that trip of a lifetime. Phone (07) 849 1666 email: aucklandwaikato@fishandgame.org.nz

This issue will cover:

New Zealand Fish and Game is managed at the national and local level by a board of elected councillors. The councillors’ tasks include setting regional fishing and hunting regulations, often in response to submissions from licence holders. Although the ministerial review has recommended cutting the number of councillors and allowing the government of the day to replace half of the elected volunteer council with paid appointments, this year’s election process went ahead unchanged.

Would you like to change the sports fishing rules?

Staff review the fishing regulations every three years, and this is your opportunity to give input on the management of sports fish in the Auckland/Waikato Region. Fish & Game is a user pays and angler/hunter managed system, so if you would like to see amendments to the current regulations, please submit your suggestions via email or in writing by December 10, 2021.

To date we have received requests to:

Once the suggested changes are received, staff will submit a report with recommendations to  council for a final decision. During the council meeting where the proposed rule changes are discussed, there will be an opportunity for licence holders to give comment (likely in May of 2022). Information about council meetings can be found on our website. Suggested rule changes can be:
emailed to aucklandwaikato@fishandgame.org.nz
mailed to 156 Brymer Road, RD 9, Hamilton 3289. 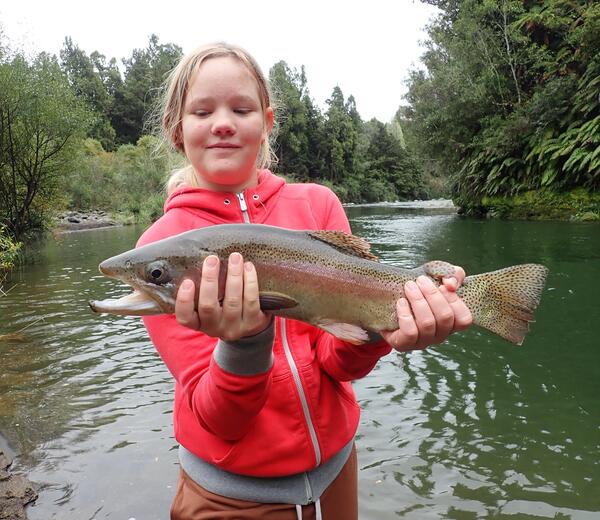 Matta Daniel with a Whakapapa Rainbow.

We need your feedback on fish releases.

Fishing at Lake Pupuke’s Quarry Lake and Parkinson’s Lake have never been better. Staff have drastically changed the stocking program over the last two years with 2-year-old fish going into Parkinson, Moana-nui, and Quarry Lake. All three lakes are great spots to take kids fishing and the short-term results have been fantastic. There is always room for improvement to make our lakes even better fisheries in the future. If you fish at Parkinson, Moana-nui, or Quarry lakes this winter please let us know how it goes. You can send your reports and photos to: aucklandwaikato@fishandgame.org.nz. 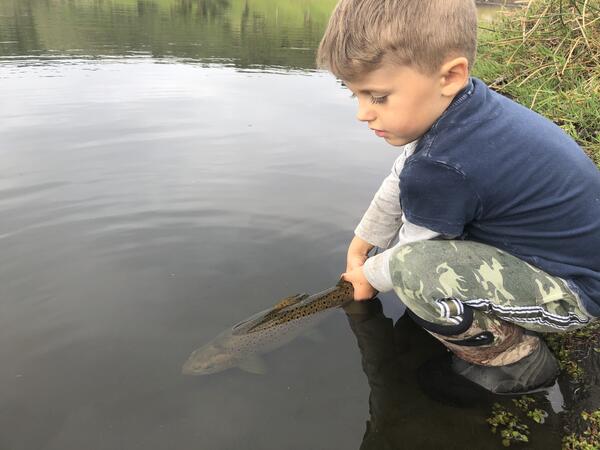 There have been a lot of changes at Lake Pupuke during the hundred plus years that trout have been released in the lake. For starters the population of Auckland has increased by over 1.5 million people, significantly increasing the chances of conflict in the limited open spaces available to the public. An increasing number of users at Lake Pupuke now means anglers are sharing the lake with kayakers, windsurfers, and RC boats.

The North Shore Radio Yacht Squadron frequently uses Quarry Lake and has expressed concern about the increased fishing activity on the lake. This problem is not unique to New Zealand and there are proposals in some US states to ban RC boats and drones in fishing areas due to conflicts. In terms of the legal status of both activities neither has a right of way. We would like to ask all anglers to please be courteous and sensible when fishing around other water-based activities. If you do have conflict, please let us know so we can work through the problem. 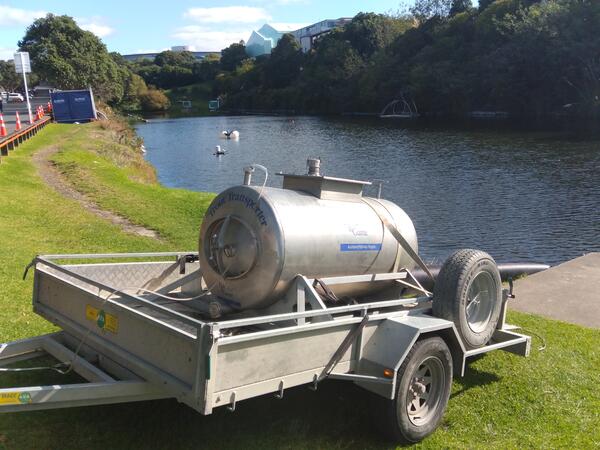 Lake Whatihua is stocked with 200 one-year-old rainbow trout annually and is one of the most scenic dune lakes to fish in the Auckland/Waikato Region. Lake Whatihua has lower catch rates than nearby Parkinson’s Lake despite receiving very little fishing pressure. Lake Whatihua can be fished from the shore but is ideal for a float tube or a small kayak, though access on the paper road leading down to the lake is quite steep.

Fortunately access at Lake Whatihua has dramatically improved due to the kindness of the landowner. A new and far easier walking path has been marked with orange trail markers from the gate to the West end of the lake across private land. In addition, staff have installed a stile next to the gate to make access a bit safer. Please be courteous and don’t leave any rubbish when accessing private land, or public land for that matter. 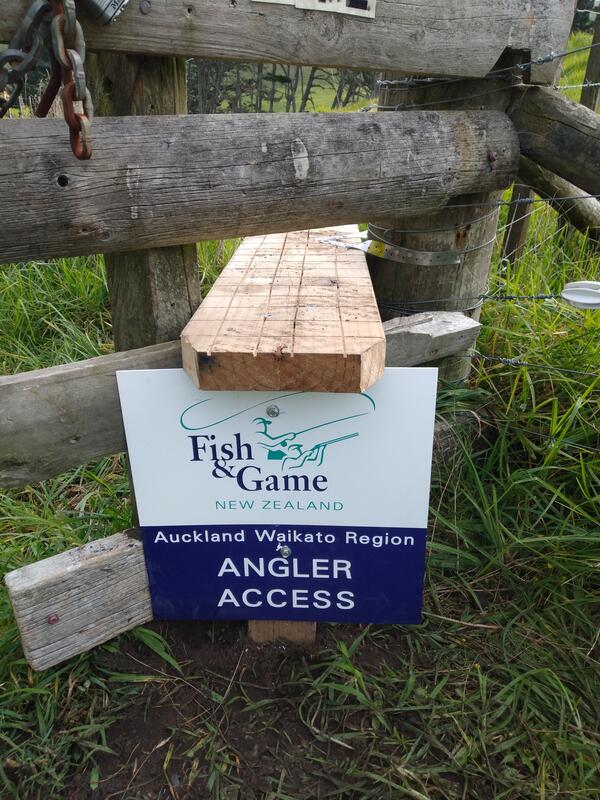 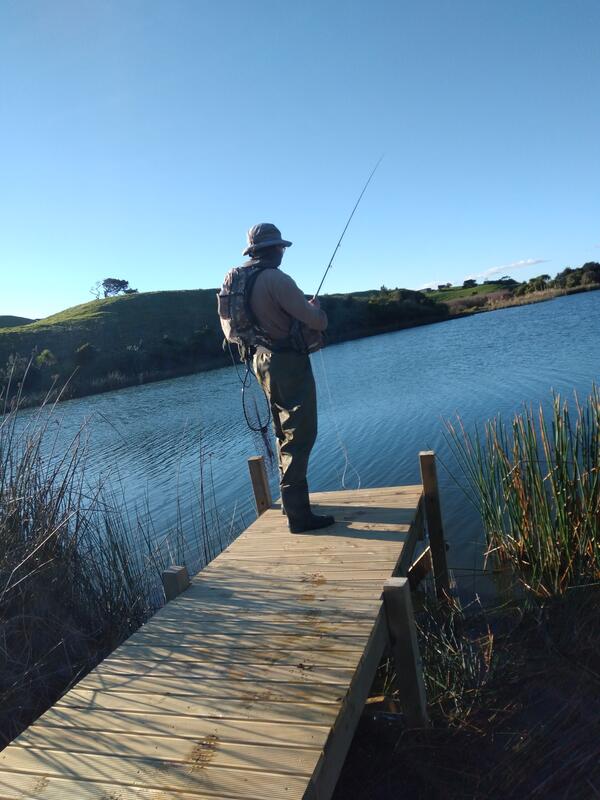 The parking areas will be marked with Fish & Game signs and the track to the access point will be marked with orange DOC style triangle markers. During the weekday open hours, the walk into the public land will be approximately 2.6 km but the access outside of open hours will be just over 5km. Although this is quite a walk the track is easy, and it is an ideal spot to use a mountain bike or electric bike. 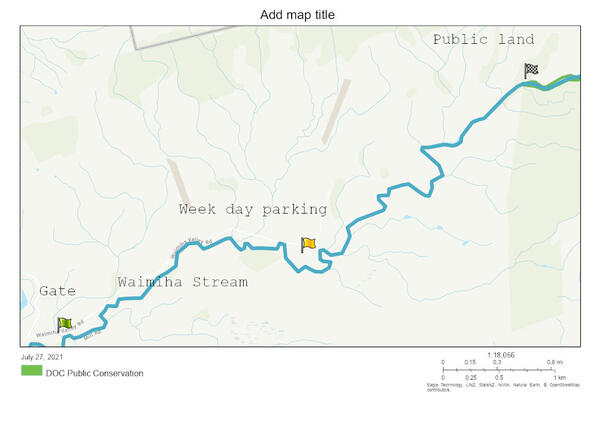 There has been a lot of debate about catch and release fishing over the years, anglers and scientists alike have studied the impact of gear type, net type, time out of water and improper handling. Although everything that happens to a fish once it has been hooked can impact Its chance of survival, the most critical variable can be avoided before the fish is hooked. If the fish is handled sensibly and doesn’t swallow the hook, the most critical variable for survival is water temperature.

Auckland/Waikato Fish & Game started discouraging late summer fishing tournaments in 2016 due to an increasing number of overseas studies indicating unacceptable levels of mortality to released fish. A 19°C temperature limit was added to all Auckland/Waikato fishing tournament permits three years ago and although it is not practical for staff to enforce temperature limits on rivers for all anglers, we would like make anglers aware of the negative impact on the fishery.

Many of the rivers and lakes in the Auckland/Waikato Fish and Game region exceed 19°C during the summer so we are asking anglers not to catch and release fish when river temperatures exceed 19°C. If you do fish during the heat of the summer, please monitor the water temperature, and consider only catching fish you intend to eat from rivers that are above 19°C.  Alternatively, anglers are encouraged to move upstream to fish areas with cooler water. A simple BBQ thermometer is an inexpensive and helpful tool for any North Island trout angler as our drift dive team regularly find sections of rivers that are over 19°C void of trout only to see dozens of fish upstream in cooler water.

Fish and Game have been raising the alarm bells about agricultural pollution, like nitrogen, impacting the health of our rivers and lakes for over a decade. It is widely believed that an upper limit of 0.80 mg/l of nitrate nitrogen is needed to protect aquatic life and not surprisingly that level may also be needed to protect humans. An article written by Dr Mike Joy in May of 2020 suggested the New Zealand drinking water limit of 11.30 mg/l for nitrate was far too high, at over ten times the 0.87 mg/l limit proposed by a 2018 Danish study that identified elevated cancer risk associated with nitrogen pollution in drinking water. In response Waikato Regional Council conducted a review of nitrate levels in surface and groundwater.

The shocking results of the nitrate review revealed 12% of the wells tested in the Waikato Region had nitrate levels over ten times the 0.87 mg/l limit, with three-quarters of wells exceeding this limit including half of the rural school network. River monitoring sites had similar results with nitrate levels exceeding 0.87 mg/l at nearly 70% of monitored sites and concentrations of nitrate increasing at over half the sites.

It is a sad realisation that nitrogen pollution has impacted so much of the Waikato’s drinking water, as removing nitrogen from water is no easy task. Hopefully, this new data and looming health risk will prompt central government to review nitrogen limits. AgResearch has mapped excessive nitrogen levels in New Zealand and the problem is not isolated to the Waikato, with many regions facing similar issues. Unfortunately, during the last round of debates on nitrogen MPI rejected lower limits due to the potential economic impacts. Hopefully during the next debate on the subject the impact on aquatic life and human health will tip the balance in favour of protecting the water all species need to survive. 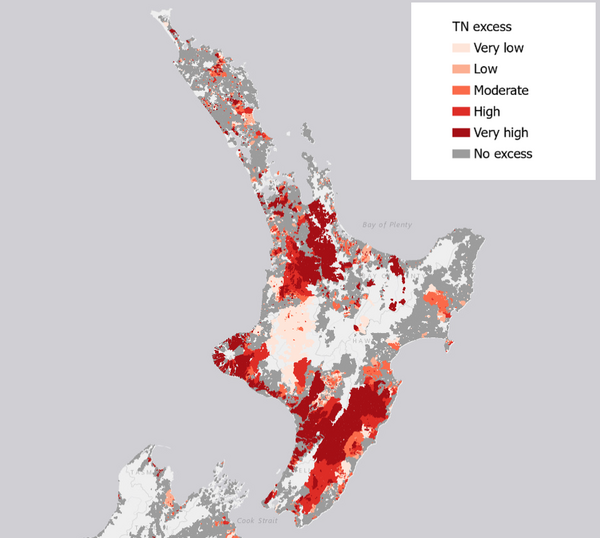