The weather has been less than ideal recently but the heat has brought out the cicadas – and the trout that feed on them.

You can hear cicada when they’re active, so if the wind is up and the insects are noisy, it’s time to tie one on.

Plopping a cicada onto the water can be a great way to target fish in pockets among faster turbulent water where smaller dry flies get soaked and sink.

Cicada live as nymphs for three to five years underground before emerging to awkwardly fly around and make lots of noise in an effort to attract a mate.

Fortunately their clumsy flight mixed with a bit of wind frequently makes them trout food you can readily mimic.

From left to right below, a series of shots showing a cicada emerging (Photos by Nigel Juby).

There has been plenty of tagged fish data coming in but staff are also interested in wild spawning fish.

If you catch a tagged, fin clipped or wild (unmarked) rainbow trout on Lake Arapuni, please ring the office (07-849 1666) or email admin@awfg.org.nz with the length and weight of the fish.

New threats to our waterways

Two new invasive species are threatening our waterways and its timely to remind anglers that the Check Clean Dry (CCD) message is not just for didymo.

A new aquatic weed (Cabomba caroliniana) linked to the aquarium trade has been found in a couple of storm water ponds in Auckland.

The weed forms a thick mat similar to hornwort and has the potential to be a real nuisance. 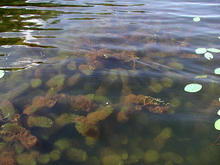 Fish & Game wants fishers to be vigilant as there may be other undetected incursions of cabomba in the region.

Auckland Regional Council hopes to eradicate the weed with herbicide before it spreads further.

Lake snow (Cyclotella bodanica) is an alga similar to didymo that has been found in several South Island lakes.

Lake snow (at left) forms slimy filaments that float in the water column making it a nuisance for fishing gear and outboard water cooling vents.

If you or anyone you know is transporting gear or boats from the South Island, please wash it all down and dry it before using it in the North Island.

The CCD message is important to stop the spread of all kinds of invasive species and could protect New Zealand waterways from many aquatic invaders that have yet to arrive if we all keep up the good work.