It is time to get out there go for a fish

The early December rain has kept river temperatures cool and most rivers are going to be in great shape for the summer holidays so don’t forget your rod.

River temperatures are starting to warm up so if you plan to fish lower elevation streams it is worth investing in a thermometer.

A $25 BBQ thermometer can save you a lot of time and hassle.

If temperatures are above 19°C move upstream or concentrate on the aerated riffles with a bit of white-water.

This is a perfect time of year to get out there as the early summer weather has kept most anglers at bay so there are still a lot of uneducated trout out there.

Waiting on DOC to open the Whakapapa Intake Road

Although there is an easement allowing driving access over the Whakapapa Intake Road the Department of Conservation is responsible for informing the new landowner of the public’s right to cross their farm.

The summary of the treaty settlement that transferred the former Landcorp Farm into private ownership clearly states that there is no change to public access.

Despite multiple attempts by Fish and Game and New Zealand Walking Access Commission staff to contact DOC about the issue there had been no response until recently.

Fish and Game staff are hopeful that we can work with DOC and the new landowner to open the Whakapapa Intake Road in the new year.

What most anglers and hunters don’t realise is that the southern access to the 42nd traverse (Kapoors Road) crosses the same farm and could be shut in a similar manner.

But allowing DOC to give away vital public access post-settlement would be unthinkable to most outdoor enthusiast.

Rest assured Fish and Game staff are working diligently on this matter and hope to resolve the issue soon.

Tokoroa puts on a massive take a kid fishing day 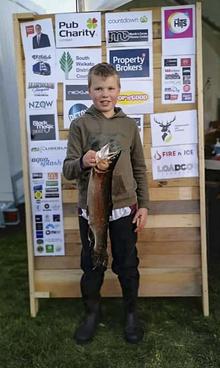 Dylan Harpur with a 2.2 kg rainbow

The Tokoroa Sports Fishing Association has put on another huge kids fishing day.

The event was likely one of the biggest kids fishing days ever held and got over 300 kids and parents down to Lake Moanna-nui to chase the 3+ kg rainbows in Tokoroa’s local fishing hole.

The biggest fish of contest was a 3.3 kg rainbow caught Rielley Alloway.

Fish and Game marked and released 50 adult fish prior to the contest and only 3 of the fish were caught indicating there are a lot of big rainbows still lurking in Tokoroa.