An attractive small river that meanders across open farmland with an extensive length of fishable water that is especially suitable for anglers that have slight mobility difficulties.  Unfortunately, trout numbers are low with a scattering of rainbows and the occassional large sea-run brown. 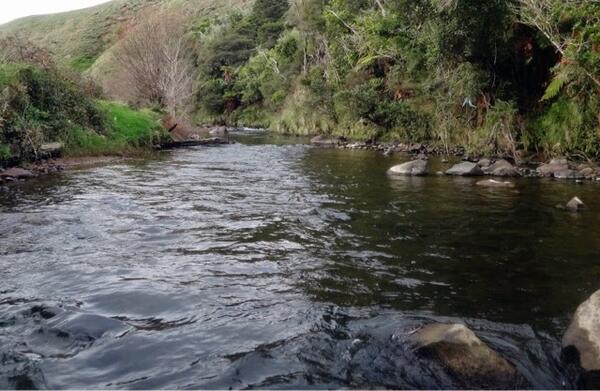 A small river flowing into Kawhia Harbour that holds a sparse population of brown trout. Fishes best in the middle reaches where the river flows through a scenic reserve.  Access from Mahoe Road.

Two small streams that flow directly into the Tasman Sea with access from the coast road between Marokopa and Awakino villages.  Both waters hold brown trout, generally small fish but occasionally there are large sea-run browns.  Although neither stream is worth a special trip, this is certainly an interesting area for a weekend away and these waters can be fished in conjunction with the other rivers described in this pamphlet.

The impressive Marokopa Falls divides the river into two fisheries.  Below the falls, the best fishing is upstream from Te Anga where there is a succession of deep pools and runs over a wide shingle bed.  Further upstream, in the short section of river below the Marokopa Falls, the river changes in character with small bouldery pools and pocket water and these waters usually hold good numbers of fish.  Public access is provided from Speedies Road.  A small tributary, the Puaroa Stream provides some small stream fishing across open farmland, landowners permission is required.

Above the Marokopa Falls there is at least 10 km of river with long deep pools and wide wadeable runs.  The section running parallel to the Waitomo Caves Road is best suited for spin fishing though there is the occasional reach offering good fly fishing water.  Further upstream there is a solid day’s fishing up through farmland and into native forest.  A small tributary, the Mangapohue Stream, also provides some fishing in its lower reaches.

Access to the lower reaches of the Tawarau River can be gained from Speedies Road upstream from the confluence with the Marokopa River.  If you are an energetic angler who does not mind scrambling over boulders then this is a delightful river.  Although the water is generally slightly discoloured, fish are usually plentiful both rainbows and browns.  Above Speedies Road there is a short section where the river flows across open farmland.

Further upstream the Tawarau flows as a series of cascades under a large rock fall.  This section can be bypassed on foot using the DoC track to Weirs Road.  The section above the rock fall is described elsewhere in this pamphlet.

The upper reaches of the Mangaohae stream, alongside Were and Ngapaenga roads, provide excellent waters for the beginner angler or anglers with slight mobility difficulties. These waters often hold surprisingly high numbers of rainbow trout as the Mangaohae meanders across open farmland with a succession of pools and runs.  Further upstream the Pomarangi Stream enters on the true left and although a small stream it does hold some large fish.  Access to the middle and upper reaches of the Pomarangi can be gained from Pomarangi Road

At the end of Were Road, a signposted DoC track follows the Mangaohae Stream down to its confluence with the Tawarau River.  The track then runs parallel to the Tawarau River before finishing at Speedies Road.  These waters flow past spectacular limestone bluffs and native forest providing some of the most impressive scenery to be found in the Waitomo District.  Rainbow trout are present in reasonable numbers and limestone formations provide a variety of interesting pools and runs.  Camping sites are available along the track and this is an excellent area for a weekend away.

Were Road is reached by taking Oparure Road, 3km north of Te Kuiti on SH3, and then Ngapaenga Road.  A marginal strip provides public access to virtually all of the Mangaohae Stream except where the stream loops away from the Mangaohae Road. 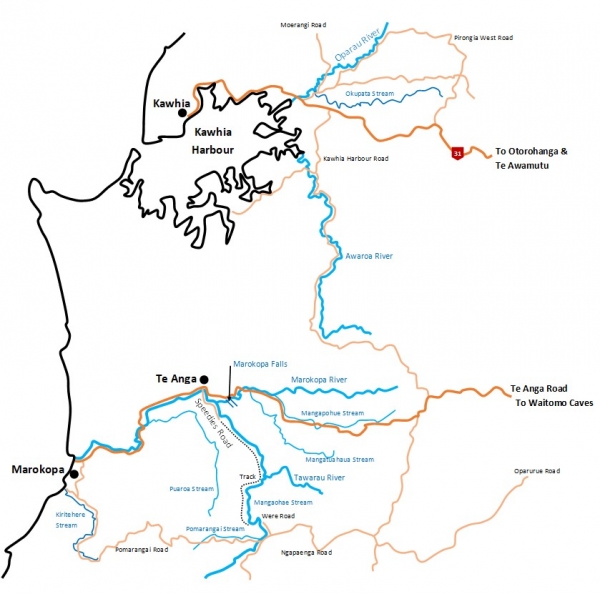