Please select here to view full pamphlet for this area.

Trout in the Waikato

Brown trout are abundant throughout the Waikato River.  They are generally large fish, averaging 1.5kg with fish over 2.5kg common. Over summer, brown trout live in the cool headwaters of the Waipa River but after spawning in April/May they move downstream to feed on the abundance of small fish in the Waikato, remaining in the river until December.

Rainbow trout are plentiful in the Waikato River in Hamilton and upstream to the Karapiro Dam.  Although rainbow trout in the Waikato are generally smaller than brown trout, they are much easier to catch and are present in the river all year round.

Trout fishing in the Waikato can be productive throughout the year but the best fishing is in the winter months when water clarity is high due to the decline in summer algal growth.  Early morning and the first hour or so after dusk are usually the most productive times to fish, but fish can be caught throughout the day.

Trout from the Waikato are safe to eat.  Considerable research has shown that the concentrations of heavy metals in Waikato trout are well below international guidelines and similar or below levels found in trout from the central North Island lakes.

Please select the links below to go directly to the information:

Trolling on the Waikato

This is a very popular spot that can fish well throughout the year.  Access to the western side of the river can be gained from the track next to the transformer station.  This track leads directly down to a large backwater at the base of the dam.  About halfway down this track, another track leads off to the left providing access to the rocky point directly opposite the station.  The best fishing is generally in the early morning or after dusk when trout move in close to the bank to feed on small fish and caddisflies.

Access to the eastern side is much more difficult and receives less fishing pressure.  A good section can be reached by walking down the steep slope about halfway down the road leading to the Karapiro powerhouse.

The Waikato River is subject to fluctuations in flow dependent on power demand.  The river can rise rapidly so caution is required. 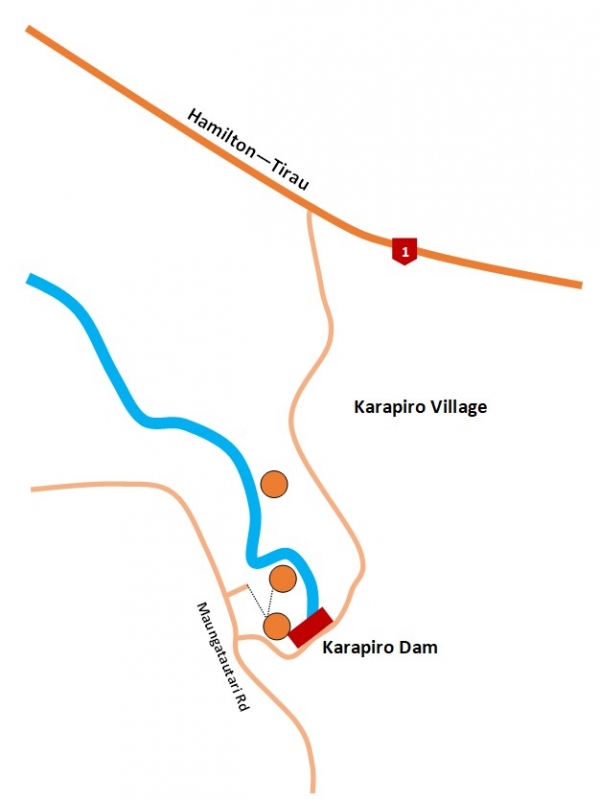 This section of the Waikato River can only be reached by boat, and considerable care is required as there are several areas containing large whirlpools, while there are numerous submerged trees along the edge.  Here the river is usually fished at low flows, usually by mooring the boat and then walking along the riverbank. In the upper reaches, large shingle beds extend out into river and these areas often hold high numbers of trout feeding on caddisfly.  Further downstream, there are numerous backwaters, boulder banks, and submerged trees that provide interesting and productive fishing.

The mouth of the Karapiro Stream is a popular location, especially at low flows when the mouth becomes more defined.  Several good locations can also be reached from the tracks that run along both sides of the river.  The northern track offers the best fishing opportunities with a large shingle bed extending out into the river near the track entrance. 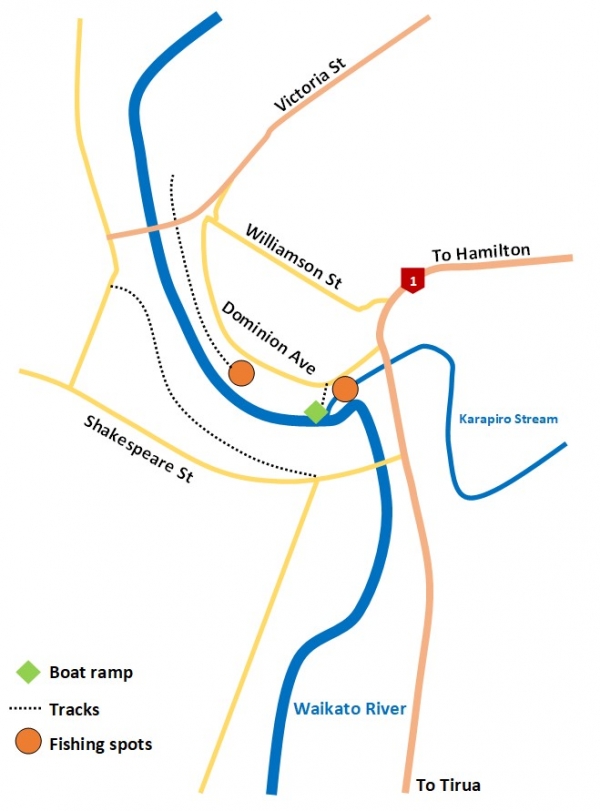 Public access is limited to a short section of river at the Narrows.  Over the warmer months, trout often congregate at the mouths of the small streams that enter the Waikato.  Elsewhere, this section of the river is best suited for trolling with only limited areas suitable for shore-based angling.

Trout can be found throughout the river at Hamilton.  Riverside walkways and parks provide access to over 15km of river with popular fishing locations at Hammon Park (Malcom Street, Hillcrest), Hamilton Gardens, Pirana Park, Ferrybank, Hamilton Parade, and from the walkway between Ann Street and Pukete. 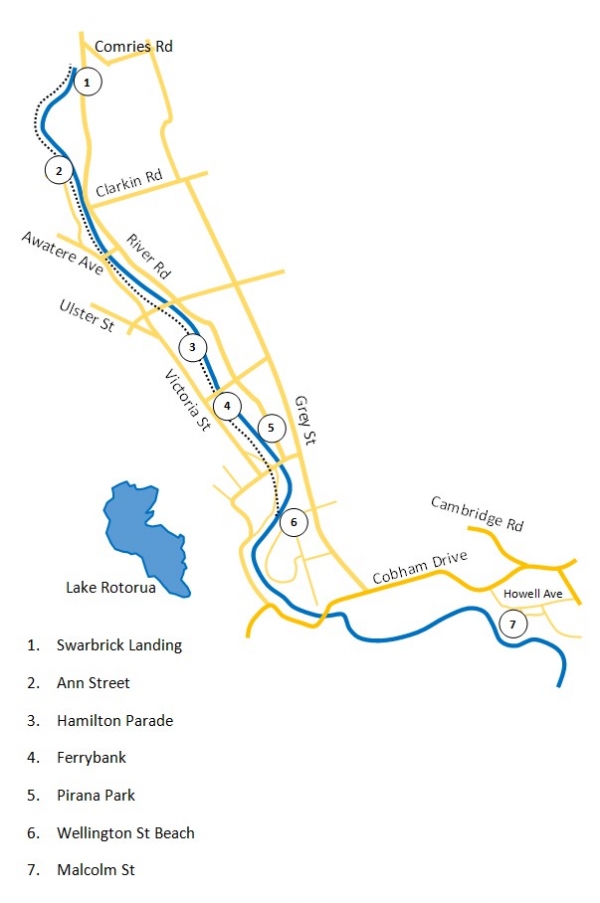 Trolling on the Waikato

Trolling can be very productive in the lower reaches of the Waikato River.  Take a normal  spinning rod and reel, with nylon around the 4 to 5kg mark, a 4oz free-running ball sinker is anchored by a swivel about 80cm or so above the lure or fly.  Suitable lures are the Black Toby in 10g or 12g sizes, the Copper Zed in 7g or 12g, or Tasmanian Devil/Cobras in gold/black combinations.  Flies to use, mostly in darker colours are rabbits, muddler minnows and other streamer style flies.  Flies can be treated with floatants to keep the fly above the sinker when trolled on the bottom.

Using your outboard (preferably 4-6hp) or a strong pair of arms, head off downstream barely keeping ahead of the current.  Cast the line out directly behind you at a normal distance and let the sinker bump along the bottom.  The river bottom is mainly sand and the puffs of sand this action creates attracts the trout.

Follow the deeper, faster channels, hug the edges where possible (ducking in and out of the willows) and skirt around the slower, weedy areas.  Your rod tip should be “tapping” evenly when you’re at the right speed and depth, ie. bouncing the sinker along the bottom.  It is surprisingly rare to snag on the bottom, but you can usually retrieve your tackle by powering back upstream and getting above the snag.  You will only find good snag-free water by experience, but be wary around town, commercial areas etc where the bank has been built up.

When you hook a trout move away from the edge and drift down while playing it.  If you catch a fish (or get a touch) make a wide circle, check your line and troll back through the area again.  There is no point leaving a “fishy” area to carry on fishing blind.

Spin fishing has proven to be the most versatile method of fishing the Waikato due to the ease of casting.  The typical rod used is 1.8 to 2.0m long, with a light spinning reel and 2.5 to 4kg nylon.

Spinning lures are very effective at most times of the day and especially in the golden light just before sunset.  Popular choices are the black Toby (10g), copper Zed (7g), red Veltic, and rainbow Rapala lures.  In flood or high water conditions, use a larger lure such as a 12g Toby or Zed as the added weight gets down to the trout and the bigger size stands out in the coloured water. Tokoroa Chickens are also successful, usually in a brown or black colour, and relatively small weights.

After dark, spin fishing with a fly is far more effective than using a spinning lure.  When spin fishing the terminal tackle consists of your chosen fly and a couple of split shot (small and medium) placed on the main line at about 50 and 70cm above the fly.  Place the smaller shot nearest to the fly, it aids casting and presentation.

Throughout the river, wet-fly fishing is generally more successful than nymph or dry-fly fishing.  When wet-fly fishing an intermediate or sinking line is used during the day and a floating line after dark.  The choice of fly is anything that will resemble the largish baitfish that provides the main food source for Waikato trout.  It is very hard to go past the simple but deadly rabbit fly, it seems to supply just the right action.  Popular colours are olive-green and black.  If you tie your own flies use chemically sharpened hooks in a heavy gauge, around sizes 4-6.  Use a good long rabbit strip to accentuate the action, and you can add flashabou and red hackles or tails to your daylight/dusk creations.  A plain, big black rabbit is probably the best for night or coloured water use.

Nymphs can be effective on rainbows in the upper reaches.  Effective patterns are large caddis imitations such as hair & copper, halfback or similar.

Bait fishing using smelt or worms is a popular method in the Waikato especially with young anglers.  The same rod & reel is used as for spin fishing with the terminal tackle consisting of a small ball sinker placed above a swivel, then about 30cm of line to a size 6 hook.  Smelt are a small native fish that can be easily caught using a baitcatcher and bread.

Rudd are extremely abundant throughout the Waikato River and can be caught in large numbers even by novice anglers. Because of their preference for warm water, the best time to go fishing for rudd is during the summer months.

Rudd can be easily caught using a light float and small hooks, size 10-14.  The usual bait is bread suspended about 20cm under the float in midwater.  Use fresh bread that has been rolled between the fingers to form a lump the size of a small pea.  The prime aim of the float is to indicate when a fish is biting.  Rudd can be attracted by ground baiting with bread crusts floating on the surface.