The Waiwawa River flows north-east from its source in the Coromandel Ranges across the Coromandel State Forest Park and into the Whitianga Harbour near Coroglen.

Excellent access to the middle reaches of the Waiwawa is provided by the Tapu-Coroglen Road.  Upstream from the confluence with the Rangihau Stream a 20 metre esplanade reserve, providing public access, runs alongside both banks of the river.  The Rangihau and Toranoho Streams both hold trout and are pleasant small streams to fish.

These two small rivers come together to form the Whangamaroro River immediately upstream from the State Highway 25 Bridge about 10 kilometres south of Whitianga.

The Mahakirau is an interesting river to fish with an abundant trout population.  The water is usually clear and convenient access is provided by 309 Road (Whitianga – Tapu) which runs alongside the river.  Upstream from State Highway 25 an esplanade reserve runs alongside the true left bank (left bank looking downstream), while upstream from the confluence with the Takugawairua Stream there is full esplanade reserve coverage.

The Kaimarama is a smaller river than the Mahakirau and has been more affected by agricultural runoff, nevertheless it offers attractive fishing water with reasonable trout numbers.  Above the confluence with the Mahakirau the first three kilometres of river has full coverage by esplanade reserves.

During the summer months, the Kapowai River has very low flows, nevertheless a healthy trout population is maintained in the large pools that are a feature of the upper reaches.  Because of low flows this is a difficult river for nymph or dry fly fishing, but it’s a safe river for children to learn spin fishing with an abundant population of rainbow trout averaging about 0.5 kg.

A small attractive stream with rainbow trout averaging 0.5 kg.  The best fishing is in the gorge where there are large stable pools or in the upper reaches where the Tapu meanders across pastoral land.  Probably not worth a special trip, but an interesting small stream nevertheless.  The Tapu runs alongside the 309 Road (Whitianga – Tapu).

The Kauaeranga River rises in the Coromandel Ranges and flows towards the Firth of Thames.  This is a delightful river with clear water and a boulder/cobble bed.  Excellent access is provided by the Kauaeranga River Valley Road which runs alongside the river for much of its length.  Scenic values are high with the surrounding forest and rugged mountains of the Coromandel Forest Park.  DoC camping areas are present along the middle and upper reaches of the river, and accommodation is available at Thames.

Rainbow trout are abundant in the upper reaches of the Kauaeranga River and although a high catch rate is often achieved, these trout are generally small.  Most anglers therefore fish the middle reaches which hold fewer, but larger fish (average 0.75 – 1 kg).  In mid-summer, algal blooms can be frustrating for fly fishers using nymphs, however dry flies are often very effective in such conditions.

The Tairua rises in the Coromandel Ranges and flows for most of its length through impressive scenery before entering Tairua Harbour.  This is recognised as an excellent dry fly river especially during spring (using green beetle flies) and midsummer (cicada flies) because of the extensive areas of manuka scrub bordering the river.

In the middle reaches, attractive water for fly fishing can be reached from the end of Hikuai Valley Road which runs parallel to the river for approximately 10 kilometres.  Access to the upper reaches can only be gained by foot from the State Highway 25A Bridge (Tairua – Kopu). An esplanade reserve follows the true left bank for approximately 3 kilometres.  Further upstream the river flows through the Tairua Forest, which is public land.

A DoC camping ground is located alongside the river at the end of Hikuai Valley Road. 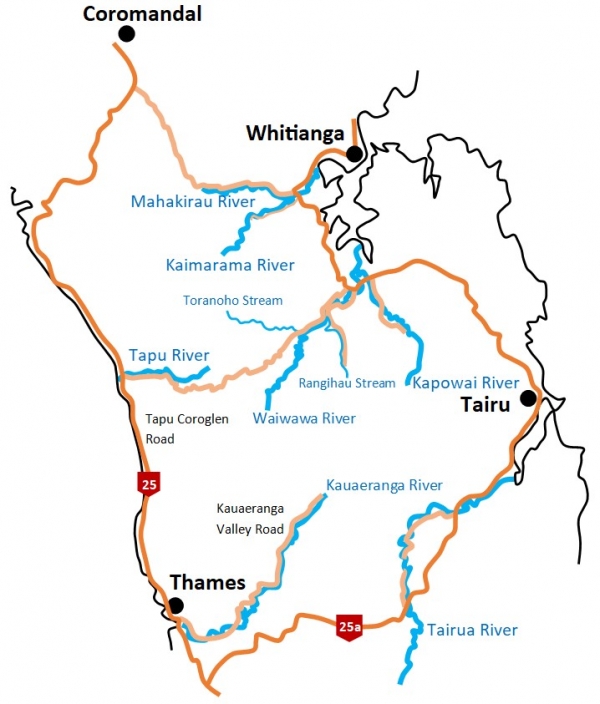