The Ohinemuri is one of the most popular rivers in the region with excellent access and a good population of both rainbow and brown trout.

The Ohinemuri arises from numerous small streams in the Waihi basin.  Many of these streams hold trout and are fished by local anglers (especially the Ruahorehore, Waimata, Walmsely and Mataura) but these are very small waterways often less than two metres wide and of limited interest to most anglers.  The largest of these streams is the Waimata with access from Ford Road or Crean Road.  An esplanade reserve extends from Ford Road to the Ohinemuri confluence.

Access to the Ohinemuri River at Waihi can be obtained from Victoria Street, State Highway 2 (to Tauranga), Baxter Road, Golden Valley Road, and State Highway 25 (to Whangamata).  A 20-metre wide esplanade reserve, providing public access, extends outwards from both sides of the river.

The most popular section of the Ohinemuri, and probably the most productive, is the Karangahake Gorge between Paeroa and Waihi.  Here there is a variety of water present – long deep pools, boulder runs, and extensive rapids.  Convenient access is provided by State Highway 2, which runs parallel to the river.  During summer, the best fishing is in the faster flowing water at the heads of pools or where there is breaking water.  About equal numbers of rainbows and browns are present, the latter often of considerable size.

The Waitawheta rises on the eastern slopes of Mt Te Aroha in the Kaimai-Mamaku State Forest Park and then flows for about 20 km northwards before entering the Ohinemuri River opposite the township of Karangahake.  Generally the scenery is spectacular with kauri forest and high basalt bluffs.  Remnants of the gold rush era can be seen throughout the valley in particular the tramway that ran adjacent to the river.

Unless there has been recent heavy rain the river is usually very clear and fish can be easily spotted.  Approximately, equal numbers of rainbow and brown trout are present.  Access to the lower reaches can be obtained by wading across the Ohinemuri River at Kauaeranga.  This section of the Waitawheta consists of long deep pools and is best suited for spin fishing.  At present, access is difficult but should soon improve with the construction of a proposed DoC track alongside the river.

Access to the upper reaches can be obtained from the DoC track at the end of Franklin Road, which can be reached from State Highway 2 via Waitawheta Road.  Several huts and camping sites are provided and this is an excellent location for a weekend away.  Recent surveys have shown that the upper reaches hold a high population of large rainbow and brown trout (averaging 1.5 - 2kg, with the occasional trout over 4 kg).  But be warned, these trout are extremely wary and while offering a considerable challenge for experienced anglers, novices will have greater success on the Ohinemuri.

This is a feeder stream of the Ohinemuri River with a good population of rainbow and brown trout.

Access to the lower reaches can be gained from State Highway 2 where there is full esplanade reserve coverage upstream for about 4 km (1.5 km above Campbell Road).  The middle reaches flow across private land parallel to Waitekauri Road and landowner permission is required.

Please select onto the map to view larger. 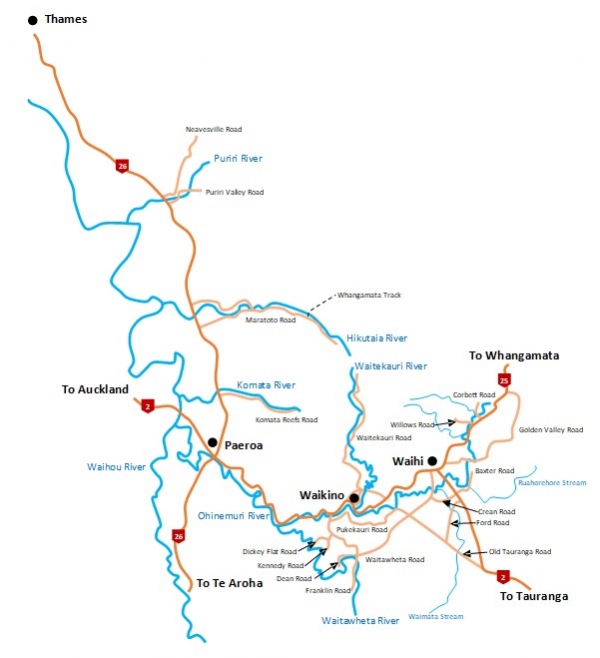