The Waipa is a large river that flows in a northerly direction from the Pureora Forest to the Waikato River at Ngaruawahia.  Downstream from Otorohanga the Waipa is generally deep flowing and channelised but when flows are low there are rapids and shingle beds that can provide excellent spin and wet fly fishing.  Good fishing can also be found at the mouths of small streams where trout often congregate in considerable numbers during summer.

Most angling occurs in the reach from Otorohanga upstream to Toa Bridge where the river flows across farmland and here there is superb water for anglers of all abilities.  Long sections of riverbank have been planted in willows and these often shelter high numbers of trout.  Wading is undemanding with shallow runs that allow anglers to cast beneath the overhanging willows or up into the deep pools.  Access is via Rangiatea Road, Otewa Road, and Waipa River Road.

Walking upstream from Toa Bridge gives access to a 15 km stretch of backcountry fishing where the Waipa meanders through rough farmland and attractive patches of native forest.  These waters can also be reached by crossing private farmland from Owawenga and Barber Roads, though this can involve a long steep walk.  Further upstream, the river flows through a steep gorge with large boulders, rapids, and turbulent runs.  This gorge can fish well but access is difficult.

Downstream from Te Kuiti, the Mangaokewa Stream is sluggish, turbid, and generally uninspiring for angling.  In contrast, further upstream the Mangaokewa provides some of the most scenic fishing in the Waipa system.  Although the water is often discoloured, there are usually good numbers of fish including some large brown trout – ideal water for spin fishing.

Access can be gained from the Mangaokewa Scenic Reserve, about 4 km south of Te Kuiti on State Highway 30, from where a track follows the stream upstream providing a good days fishing. 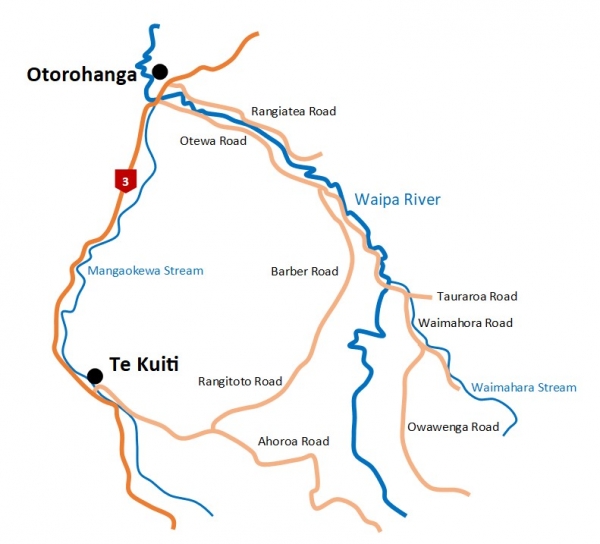