Stalking large brown trout with the dry fly or nymph is the highlight for many anglers fishing the Puniu River, a popular fishery close to Te Awamutu with good access and over 20 km of fishing water.

The Puniu meanders across farmland offering relatively easy fishing with a good population of rainbows and large brown trout.  Most fishing occurs in the middle and upper reaches where productive water can be reached from Wharepapa, Newman, Seafund, Bayley, and Ngaroma Roads.  Generally access is across private land but in the middle reaches an access reserve extends 3 km downstream from Bayley Road and 3 km upstream to Ngaroma Road.

The headwaters can be reached across private farmland from Duncans Road.  Here the Puniu is a small stream that flows across rough pastoral land with patches of native forest.   There are usually plenty of trout and these waters provide a good alternative to the nearby Mangatutu Stream.

A large stream with very clear water but the fish are often wary as the Mangatutu receives heavy angling pressure especially in the more accessible reaches.  Public access is limited to the upper reaches and elsewhere landowner permission should be sought.

Below Leithbridge Road there is excellent water that is less heavily fished with access obtained by walking downstream from the bridge on Leithbridge Road or from private land on Wharepunga Road.  Further upstream between the Leithbridge and Wharepunga bridges, the Mangatutu is a pleasure to fish with low clear banks and easy access that is suitable for anglers with slight mobility difficulties.

The upper reaches can be fished by walking upstream from the Wharepunga Bridge along the public access reserve which is on both sides on the river and extends up into the Pureora Forest.  Access can also be gained across private land from Duncan Road.  This section of the Mangatutu has plenty of pools, the ocassional patch of willows, and an abundant trout population.

The Waipari holds some of the biggest rainbows in the Waipa headwaters. Although similar in size to the Mangatutu, the Waipari receives far less angling pressure because there is no direct public access.  The Waipari is usually fished in the lower reaches above its confluence with the Puniu River. Access is across private farmland from Whatauri Settlement Road via Wharepapa Road.  Further upstream the river flows through a series of gorges and fishing can be difficult.  The upper reaches can be accessed from Ngaroma Road. 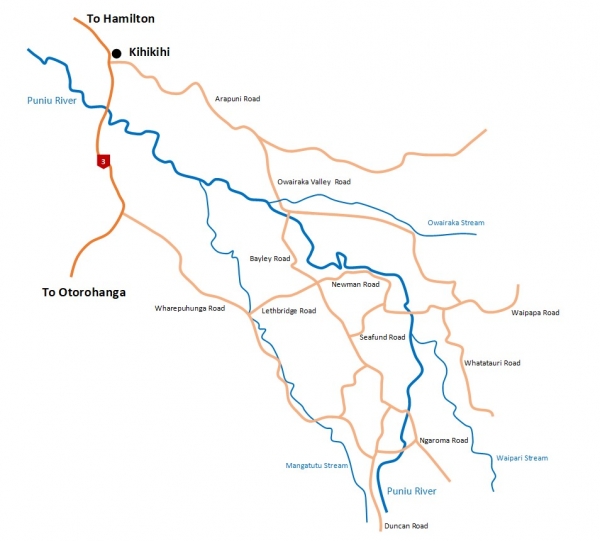