Spring creeks abound throughout the South Waikato District providing many kilometres of fishing with good access and numerous trout. These “spring creeks” vary from small rivers with considerable flows, but all are spring-fed and offer a fishing experience quite different from rain-fed rivers. Typically, South Waikato spring creeks hold abundant populations of rainbow trout and although many fish are small, there are generally good numbers of large trout.

Dry fly fishing is often the most successful method on spring creeks due to the clarity of the water. Popular dry flies include “attractor patterns” such as the Royal Wulff and beetle imitations (brown grass beetle an d the green manuka beetle). Light nymphs can also be very successful including Hare and Copper, Halfback Nymph and Pheasant Tail. Spin fishing is popular on the larger rivers, generally with light lures such as the smaller Veltic and Mepps spinners.

The Waihou and Waimakariri Stream are open to anglers all year, the other waters are closed during the winter spawning season. Please check the current angling regulations in the “Sports Fishing Guide”, provided free when you purchase a licence.

Please select the links below to go directly to the information:

One of the country’s best spring-fed rivers providing classic trout fishing in very clear water. Typically, rainbow trout are very abundant with about 1000 fish per kilometre and although most fish are small, there is still a good population of large trout.

Between Okoroire and State Highway 5 there is no public access to the river and permission should be obtained from local landowners on Somervilles Road or SH5. Upstream from SH5, the river is wadeable over cobblestone bed, and the stretch of water between here and Whites Road gives a good days fishing. A “fishing reserve” provides public access on both sides of the river, except for the first kilometre above SH 5 where the reserve is restricted to the true left bank (left bank looking downstream).

Public Access continues upstream from Whites Road where a walkway runs alongside the river. In this section, the Waihou meanders across open farmland with short, deep pools and long cobblestones runs offering a variety of attractive fishing water. About 4 kilometres above Whites Road, the river enters a series of large springs that provide challenging but usually frustrating fishing on big wary rainbows. Above the springs, the Waihou rapidly diminishes in size to a small stream offering limited fishing opportunities. Access to the walkway can be gained from either Whites Road or Leslie Road.

A large spring-fed stream with several stretches providing good fishing with easy access. Access to the lower reaches is generally difficult but there is some reasonable fishing water near Tirau with access from Okoroire Road of downstream from Taumangi Road. There is no public access so make sure you ask the landowner.

In the headwaters there is good public access with an esplanade reserve starting 1km downstream from Putaruru and extending upstream for about 10 kilometres. At Putaruru a public walkway follows the river ans this is a popular reach for local anglers. Between Putaruru and Domain Road, the esplanade reserve is restricted to the true left bank (looking downstream). Above Domain Road, the reserve continues upstream on both banks for at least 5 kilometres.

A popular river, highly valued by local anglers, with an abundant trout population and good public access in the upper reaches.

Further upstream the river flows across open farmland and there is some good water above Rapurapu Road where an esplanade reserve extends for about one kilometre.

From Waiomou Road, a fishing reserve provides public access to both sides of the river for about 3 kilometres downstream and 5 kilometres upstream. Here the river is narrow and typically fast flowing, but fish numbers are high and this is attractive water. Good water can also be reached by crossing farmland on the Te Poi-Tapapa road—landowners permission must be obtained. 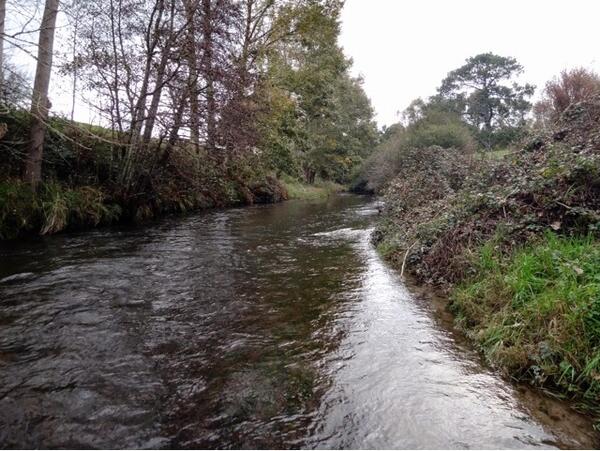 The Waimakariri is a large spring-fed stream with a reputation for holding huge numbers of small rainbow trout, nevertheless there are good fish present for anglers will to put in the effort.

Downstream from State Highway 5, the Waimakariri meanders across open farmland providing easy fishing opportunities. Public access is provided by an esplanade reserve that extends from SH5 down stream on both banks for about 2 kilometres. Access can also be gained from landowners on Somerville Road where private farm-roads provide access to an extensive length of good water.

Upstream from State Highway 5, the Waimakariri runs parallel to Waimakariri Road. Here the banks are heavily overgrown, and the stream can only be fished by wading upstream against a strong current, though an experienced angler should have few difficulties. An esplanade reserve extends upstream from SH5 for about two kilometres.

There are many small streams throughout the South Waikato that hold good trout populations, Albeit generally of small fish. Nevertheless they provide interesting fishing and late in the season can often hold large trout. 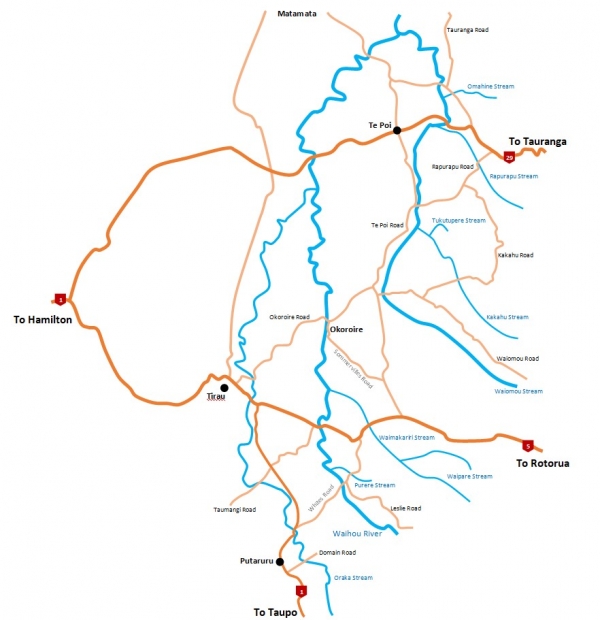 A tributary of Lake Karapiro, the Little Waipa is a spring-fed stream offering clear water and an abundant trout population. The trout are river-resident as a steep gorge about a kilometre upstream from the mouth is a barrier to trout movement from Lake Karapiro. Below the gorge, the stream is generally inaccessible and fish numbers are low. However, the stream-mouth is a popular fishing location with access from Hirahora Road.

Drift five surveys of the Little Waipa above the gorge have reported that trout are numerous, but it is a difficult water to fish because of an extensive coverage of aquatic weeds coupled with very clear water—the fish are there but they are hard to catch. Trout will frequently be observed feeding fro the surface, especially on hot summer days, and often the best approach is to use a dry fly, perhaps a Royal Wulff or a Twilight Beauty and considerable stealth.

The Little Waipa Stream is located about 8km west of Putaruru. There is no public access and permission should be requested from landowners. The Little Waipa crossed the Putaruru-Arapuni, person and Old Taupo Roads. Good water that is seldom fished can also be reached across private farmland from Huihuitaha Road. For most of its length the Little Waipa flows deep over a pumic sand and rock bed; it is therefore wadable in few places. Both rainbows and browns are present, the latter not common.

The Pokaiwhenua Stream is a major tributary of Lake Karapiro and is therefore one of the few rivers in the region where anglers can tackle lake-run trout. In addition, the upper Pokaiwhenua offers 20kms of good fishing on river resident trout.

Waterfalls adjacent to the Putaruru-Arapuni Road divide the Pokaiwhenua Stream into two sections. Above the falls there is a high population of river-resident rainbow and brown trout, the stream bed consists of bedrock, gravel and pumic sands, and is wadeable in most places. About 1.5 kilometres upstream from Waotu Road an extensive esplanade reserve extends along the stream for at least five kilometres, however there is no public access to this reserve. Consequently, permission to cross private land is required from the landowner on Watou Road or on the Putaruru-Arapuni Road. Access can also be obtained across private farmland on Dukeson Road.

Below the falls, there is twelve kilometres of river. Here the Pokaiwhenua runs through a steep vally with the occasional inaccessible gorge, nevertheless there is still a considerable length of good fishing water. This section usually holds high numbers of trout late in the season, though at this time of year the river takes a long time to clear after moderate rain. Access to the lower Pokaiwhenua is across private farmland and thus the londowners permission must be obtained. However there are many farms that provide access to the river, either via the Putaruru-Arapuni Road, State Highway 1 (Longview farms), Horahora Road and Hildreth Road.

Access to the mouth is via Horahora Road and this is a popular location for anglers fishing Lake Karapiro. 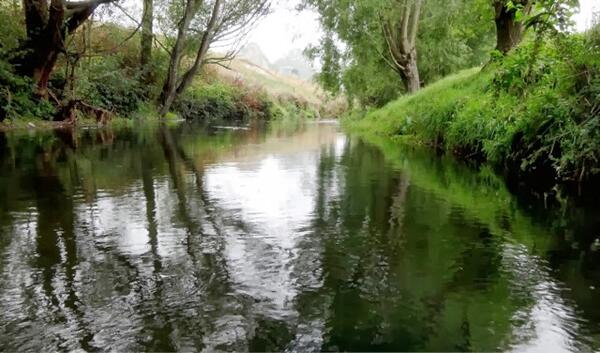 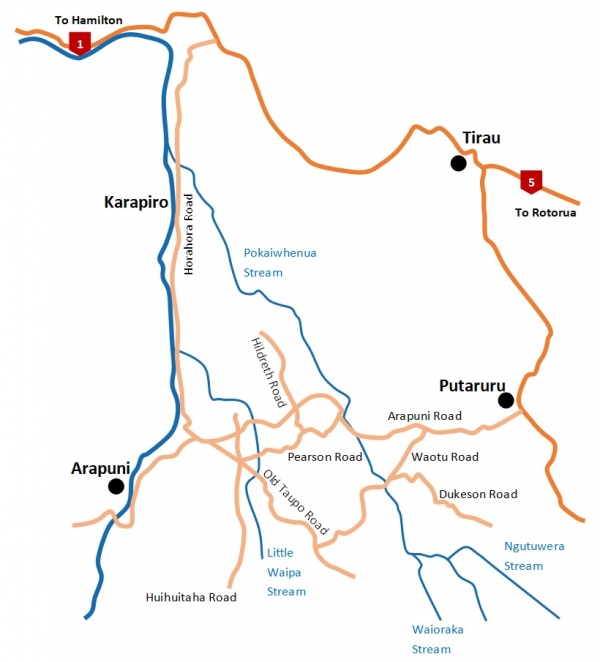