The Waipa River is largely fished above Otorohanga where there is over 30km of superb fishing water. The river runs parallel to Otewa Road for some 16km to Toa Bridge, the upstream limit for winter fishing. Above Toa Bridge the river is mainly accessible by foot. 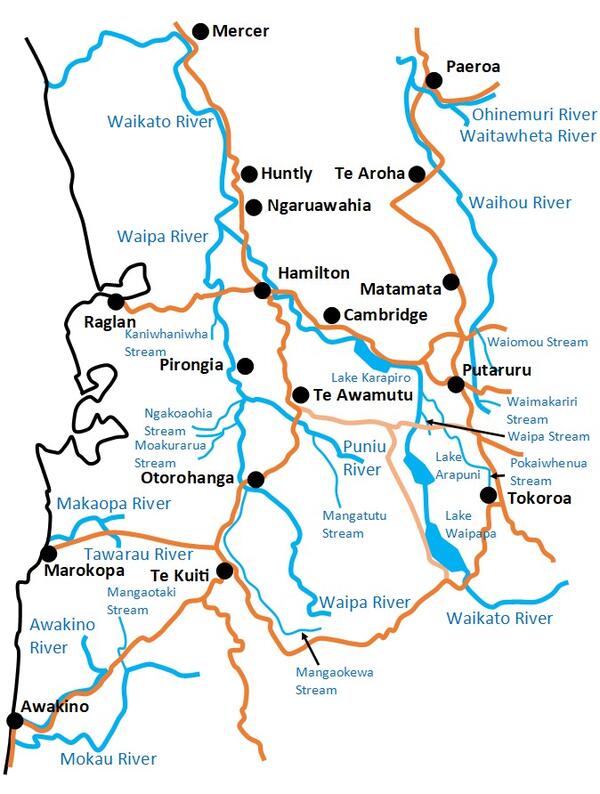 The Puniu River is the largest tributary of the Waipa River, flowing through the Pureora Forest and joining the river at Pirongia. The Puniu River offers 20km of fishing water, mostly in the headwaters and middle reaches. Access to the river is from Bayley, Newman and Duncan Roads. The river bed here consists of boulders, gravel and bedrock and is wadeable.

A very popular stream, southwest of Te Awamutu, that is heavily fished by local anglers. Access is from the Wharepuhunga Road which runs parallel to the Mangatutu Stream for 5km. The Mangatutu offers idea fly fishing waters with clear banks and a procession of pools and runs. Designated artificial fly fishing from its source to the Lethbridge Road Bridge.

The Moakurarua Stream has its source in the steep hill country to the west of Otorohanga and flows in a northerly direction to join the Waipa River just south of Pirongia. In the middle and upper reaches the Moakurarua has a clear gravel bottom, mostly wadeable offering good fishing waters. Access is gained off the Otorohanga/Horokiwi or Otorohanga/Kawhia Roads. The lower reaches are deep and sluggish and generally not favoured by anglers.

Rising on Mt Pirongia the Ngakoaohia Stream flows east to join the Waipa River. This small stream consists of pools and runs with a clear gravel bottom which lends itself well to nymph and dryfly fishing. The Ngakoaohia is open to artificial fly only from its source to the Pirongia/Kawhia Road Bridge.

A small shingle and boulder stream that runs through bush and farm land down the northern slopes of Mt Pirongia. Access is off the Limeworks Loop Road. The stream is mainly fished with nymph or dryfly during the summer, and is open to artificial fly only.

In its upper reaches the Mangaokewa is a very scenic stream flowing through an extensive area of native forest. These waters are best suited for spin fishing and hold good size rainbow and brown trout. Access is off the Mangaokewa Road and from the scenic Mangaokewa Reserve just south of Te Kuiti where a walkway follows the stream for 14km.