Less than 50% of the rivers in the Auckland/Waikato region are covered by esplanade reserves (the “Queens Chain”).  But notwithstanding the presence or absence of an esplanade reserve, anglers are dependent upon landowner goodwill to fully enjoy angling opportunities.

Accordingly make sure you take the time to extend to landowners the common courtesies that you would expect:

In our experience very few landowners will refuse access to genuine anglers.

Located about 20km northeast of Wellsford and approximately 2km from the east coast are two dune lakes that provide good rudd and tench fishing.  Lake Tomarata is the most accessible with vehicle access to the lakeshore.  Access to Spectacle Lake is more difficult, with less fishable water.  Both lakes are heavily used by water-skiers.

A large shallow lake containing rudd, perch, tench, goldfish and koi.  Grass carp are present in Kareta to control weed beds and we ask that any grass carp hooked is released. Lake Kereta is located at the end of Wilson Road, via South Head Road, in the Woodhill Forest on the South Kaipara Heads.  Please check the Walking Access site for public land before you go to the lake.

This lake in North Shore City contains a wide diversity of coarse fish with especially good numbers of tench and rudd.  Pupuke has a reputation as a night fishery, generally fishing best after dark.  The adjoining Smale’s Quarry Lake is also a popular fishery and can be reached at the end of Taharoto Rd, Takapuna.  Public access is available to a number of sites around the lake margin.

This river and it’s side streams sometimes support good numbers of koi carp, but it is too channelised to hold many fish.  Access from SH1 south of Mercer.

This is a highly recommended river fishery with good numbers of rudd, koi carp, goldfish, and catfish. From SH1, turn off at the Meremere Power Station into Island Block Road, then travel for about 2km to the Whangamarino Bridge. Fish & Game land is signposted but not accessible from April to the end of duck shooting season, otherwise landowner permission is essential. Access can also be obtained from the “humpback bridge” on Falls Road (turn right at the end of Island Block Road). 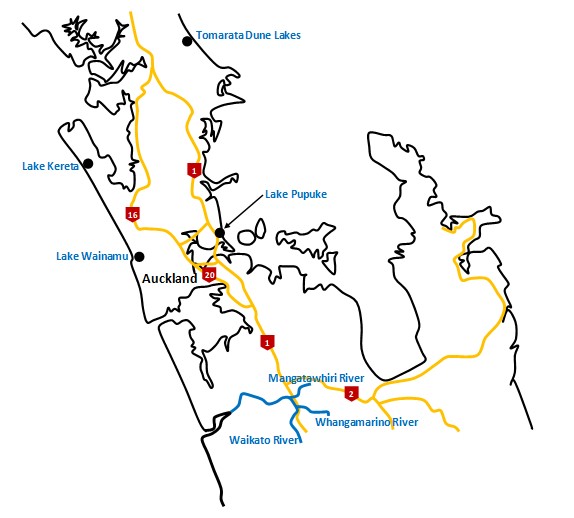 This stream connects the Waikato River with Lake Waikare and is a popular fishing location but action can be patchy depending on flow.  Rudd, goldfish, catfish and koi are present.  Access from Te Onetea Road, about 1km south of Rangiriri on SH1. A marginal reserve alongside the Te Onetea Road provides access to the stream, and there is also a stretch on public land worth fishing between SH1 and the Waikato River, otherwise landowner permission is required.

There are many lakes in the lower Waikato catchment that hold coarse fish, including three large shallow lakes – Whangape, Waahi and Waikare. All hold huge numbers of rudd, goldfish, catfish, and koi carp.  Generally, these lakes are very dirty and most fishing occurs at the lake outlets.

The Hikutaia Cut is a large man-made pond that is connected to the lower Waihou River. This fishery holds tench, rudd, goldfish, and the occasional koi carp. Access is from Captain Cook Road, via SH2 (Auckland-Paeroa).

A large pond holding tench and rudd in Waihi Township.  Waihi Lake is located just before the Ohinemuri River next to SH2 (Waihi-Tauranga).

A popular fishery with easy access provided by a lakeside domain.  Lake Hakanoa holds all coarse fish species including high numbers of rudd and some large goldfish and koi carp. Hakanoa is located on the eastern side of Huntly Township.

Popular stream but with limited public access so landowner permission is required. Access is from Taupiri on SH1, turn into Gordonton Road (Hamilton bypass) and then into Orini Road. Rudd, catfish, goldfish, and koi carp are abundant.

Lake Kainui is regarded as the best coarse fishery of the eight small lakes between Ngaruawahia and Hamilton. Access is from Lake Road, via River Road – which runs parallel to the eastern bank of the Waikato River between Hamilton and Ngaruawahia. A reserve beside a row of poplars gives foot access to Lake Kainui, otherwise private access via adjoining landowners.

Lake Rotoroa in the center of Hamilton City is a popular coarse fishery with good numbers of perch, goldfish, and catfish. Rudd numbers have declined in recent years but are expected to recover. Large tench are also present. Access is good with an extensive reserve along the lake margin.

A popular coarse fishery for junior anglers located in the Hamilton Botanical Gardens. Holds good numbers of perch, rudd, and large goldfish.  When fishing, make sure you keep off the gardens and be aware of other park users as park staff have previously attempted to close the lake due to a perceived risk to pedestrians.

The Waikato River from the Karapiro Dam to the sea contains high numbers of rudd, catfish and koi carp.  There are many access points and some favored locations are the back-channels near Hoods Landing; the Les Batkin Reserve at Tuakau; the western shore either side of the Mercer Bridge, along the Huntly back road, Taupiri, and Hamilton City.

Popular coarse fishery near Te Awamutu with good vehicle access and an extensive area of fishable water. Rudd, goldfish, and catfish are abundant.

This is a large pond in Otorohanga Township with access from the heavy vehicle bypass. Lake Huiputea holds rudd and is excellent water for junior anglers. 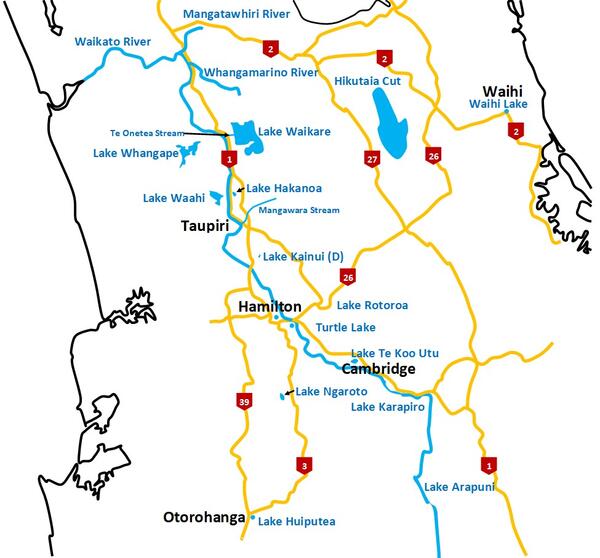